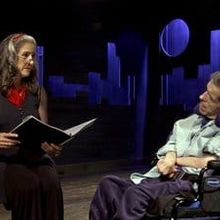 Join Ann for the following session during our Third Annual National Caregiving Conference:

Woody's Order on Friday, Nov. 9, at 1 p.m.
Ann will screen her 16 minute award winning short documentary, Woody's Order! and have a short Q&A and then do a portion of her solo play Woody's Order! for the audience as well.

Cerebral palsy is the most common physical disability in childhood, yet widely misunderstood. CP can be mild—weakness in one hand—to severe, in which people have little control over movement or speech. Even the most well-meaning passersby may stare curiously at someone with severe CP. Or, thinking it more polite, they may choose to avoid eye contact altogether.

People with CP experience desires and dreams, love and loss—the same as people without it.

Woody’s Order! takes us on a journey with a man who has CP, 1948 to present day. From a life tenderly and comprehensively documented in photographs and home movies, we cannot and really don’t want to turn away.

Our tour guide is his adoring sister. In a stirring, lyrical recitation, she describes experiencing life’s milestones as a sibling of someone with CP and inevitably, his caregiver.

The end result humanizes not only the severely disabled, but also the legions of unsung family members responsible for their care. Bonded by a strong, organized network, they share best practices and emotional support online and in meetings.

Their lifetimes of altruism often silence a deep, nagging concern: What’s left for me? Woody’s Order! both asks and answers the question, loud and clear.

Woody was eight when he asked his parents for a sibling the only way a bright, nonverbal, cerebral palsied boy could-he pointed to Mom's tummy and Dad's ...lap. The result: Ann-an actress/comedian torn between her blossoming Broadway career (playing Elizabeth Taylor's daughter) and being her brother's loving caregiver. How do you live your own life when you're Woody's Order! Broadway: The Little Foxes, The House of Blue Leaves, Some Americans Abroad, The Women (also stood by for Cynthia Nixon). Numerous Regional and Off Broadway performances. Cast Albums: Yours Anne, Hannah 1939. TV: Seinfeld, General Hospital, Law & Order, Special Victims Unit, Murphy Brown, Ellen, Whoppi, Ediucation of Max Bickford, Love & War, Kate & Allie, HBO's Breast Men. Film: Serendipity, Limitless, Archeaology of a Woman, Wall Street, Bob Roberts. Radio: Tales From The South-PRX. Documentary: Woody's ORder! A life member of Ensemble Studio Theatre in NYC where she served on its Board for over a decade. Founding member of The New Group Theatre, Naked Angels Theatre and Ensemble Studio Theatre/LA. Currently in EST Playwrights Unit. A proud member of Vocal Ease, a volunteer singing organization that provides live entertainment for NYC senior citizens at hospitals, nursing homes and senior centers. They perform cabaret-style shows with four singers and piano. (www.vocaleaseinc.org) Ann's mother died when Ann was 20 and she assumed the caregiving role her mother had held. Within a few years her father developed dementia of the Alzheimer's type. She added his caregiving to her already full plate. Her father's neurologist, Department Chair of Neurology at Pitt School of Medicine, had Ann give lectures to third year med students on: The Effect of Dementia on The Family. What sustained Ann in times of deep despair? Her love of family and her irreverent sense of humor!

We are so grateful to the following sponsors for making our conference possible: