Tell us about the nominee's caregiving story. 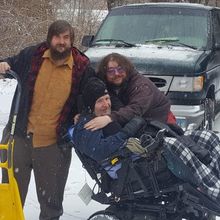 It's beyond difficult to describe all that my son has given up for the care he has provided me in the last 15 years but I can try.

Typing is very difficult due to my multiple sclerosis but it is the least I can do in an attempt to recognize the overwhelming responsibilities on his shoulders.

When he was 12, around the year 2000, I had gotten a diagnosis that would change everything forever, this was the beginning of multiple sclerosis. It started one summer when I brought him to a boy scouting adventure at Camp Tadma and at the trading post I couldn't fill out a check for a knife that I wanted to purchase for him. Throughout that week I had been falling down with heightened frequency and just wrote it off as me being more clumsy than normal. About halfway through the week-long venture I had to leave him in the care of the scouts in order to get checked out at the nearest hospital where I met the diagnosis that shattered our world.

From an early age Forest was a helpful, compassionate, strong, and patient boy...in this time he has proven those attributes over and over again seemingly without fail. However, after the diagnosis and the subsequent divorce due to my wife's inability to cope with my illness, Forest took more on his plate than I could have ever asked him.

From middle school onward he has assisted me with wound care, dressing, feeding, housework, maintenance and more. He was able to complete high school with better than average marks, he helped his grandmother and grandfather when they got to old age and even helps with his friend's family members when needed. He intended on getting a college degree in business, economics, and marketing but had to stop school in late 2011 after I became bed bound due to a broken femur and complications from multiple sclerosis. He intends to go back to college but being a full-time caregiver doesn't leave him much time for one class let alone a full course load.

In the span of the last decade, I have suffered through numerous hospitalizations due to bladder infections of which he has been with me through each and every one. He cared for me by himself for many years as to shield his younger brother from the difficulties that faced our shattered family. In this time his own health and well being took a back seat but I am pleased to say he has managed to lose over 200 pounds and has become a truly well-rounded young man.

At the end of 2015, he assisted me while in a prolonged facility visit to get on Medicare Part C which became a monumental task even after the fact. Once on the medical program, we began receiving some help from VNS (a nursing agency) who provides a few hours of aid a week to assist with various tasks such as bathing and wound care. He persists to prepare for them before, assist them during (since most can not flip me on their own), trains some in learned techniques and cleans up after they leave.

Now that I am bed bound he helps me with everything from meals, tech help, advice, filling out paperwork, groceries. Honestly I could fill pages with all he does for me in that fashion. He did this until 2017 without any form of payment and now receives pay for 25 hours out of the week even though he continues to spend every day on call for me and he says "I'm used to nothing so this is wonderful". Even with his meager income he still finds ways to help and never frivolously spends. Just one example that happened recently, the sump pump broke and the subsequent flooding in the basement killed the furnace. The night it flooded he spent digging a trench down the hill into the woods using a shovel in order to drain the water from the basement without a functional pump. He then proceeded to go to Walmart after 12 am in the morning and purchased 2 additional kerosene heaters which I could have been hospitalized without. It even saved my house as the pipes would have frozen without them. He gathered a new sump pump and is preparing to install it himself as if this wasn't enough he made the trips to the kero stations and kept the heaters running for over a week until he put a down payment on a new furnace for the home. This is just one example of many that he has performed over the years and I am grateful to have such a wonderful and loving son.

I don't know how else to say it but he has been my rock through all of this, without him I would have given up and probably been dead by now. I know that is grim of me to say but it is truly accurate. He still tells me that I am a wonderful father and knows I would have sacrificed everything for him, I only wish I could give him more. He gives his all and asks for little to nothing in return as his true value is his family even though it is broken and small. I feel ashamed for all I have put him through and he is the most deserving person I can think of for an award like this.

How does the nominee complement his or her caregiving responsibilities with their own needs and interests?
For many years he has cooked for me and learned to be quite the chef. He can sharpen the knives like a professional and it doesn't matter what he cooks, it always ends up delicious. He has been cooking since a very early age and has seemingly mastered the use of spices and abilities to cook not only normal food but diabetic friendly food that can be easy to eat with my hands the way they are. I don't even have teeth and he can adapt to my needs as they change.

For a number of years, he enjoyed filling his spare time on a game called World of Warcraft where he did more than just play. Using that online game he was practicing marketing and economic principles using the auction house as it has been one of his major interests to own a business one day. He also used this program to gather friends and created a guild that reached nearly a thousand people at its peak. Through that venture, he was able to hone his skills to a potential of leadership, guidance, and made quite a few friends in the process...even while stuck at home taking care of me.

There was a time that Forest had reached around 425 lbs, I am happy to say he has put a lot more effort into his health and is nearing 200 lbs, he makes me proud. People around town consider him an inspiration as the stories that surround him are often larger than life. He always loved mythical stories and Hercules has been his favorite since he was a young boy. I must say they have many similarities and his legend is still being crafted as he is only 27.

Tell us about the nominee's problem-solving techniques.
Forest is no stranger to challenges. For example, when he was only 15 there was a leak on the pipe connecting the water heater, in a quick-thinking move he was able to fix it to this day with just 4 staples and an 8-inch length of rope. He is always thinking out of the box and even coming up with small inventions and modifying equipment to better suit our needs.

Another example is when my pressure relief air mattress sprang a leak, his quick thinking using a bit of moleskin and some super glue patched the hole and to this day his fix holds. His techniques and frugal ways have made it possible for me to remain at our home rather than giving it all up and sending me to a facility. Every day I get to live at home is a blessing and I only have my son to thank for that.

This last year he has even started fixing drywall, he made me a wooden ramp after mine broke, and even painted a large portion of the house to help me with a refinance that didn't go through...(long story).

His problem-solving techniques don't stop with physical fixes. This summer around June or July we missed one piece of mail from DSS and had later received a letter that stated it had been longer than 30 days so my health coverage dropped. His relentless calls, application work, and stubborn get-the-job-done attitude got me back on Medicaid with retroactive benefits temporarily by October and fully by December. It took him hundreds of phone calls and countless hours but he got it done...he is incredible.

How does the nominee use online resources or community services?
Currently, he doesn't use many. There is one program called Allied Community Resources that he joined at the beginning of 2017 and began receiving pay for about 25 hours a week. Originally he fought against the idea as he didn't want this to be about money but the PCA's we were looking for to fill the positions were hard to find and even harder to interview. We scheduled several to come and only one came, then turned around shortly after entering the driveway.

By the end of 2016 the social workers on my case were telling me if we didn't find a PCA in a hurry then he would have fallen off of the PCA waiver program so he took the position. He then assisted his brother to apply and be accepted to help him for a number of hours a week while getting a bit of pay for it. There was another time years ago before we could have ever hoped for something such as the PCA waiver where he reached out to the South Britain Congregational Church for some form of assistance and was able to get a service called lawn gorillas to come and do the fall clean up on the lawn.

He has spoken with social workers and is currently working on emergency assistance from the Multiple Sclerosis Foundation in hopes of something...in a month I turn 65 and my long term disability benefits go away effectively halving my income. He is trying for energy assistance and even applied for a new insurance today in hopes to negate the monthly charge from my AARP supplemental.

How does the nominee remain involved in his or her community (including online)?
He still stays in contact with the guild he built using the online game (World of Warcraft) and has met many people all around the world and often refers to them as an extended family.

Within the community, he has wonderful friends who will even come to him when he doesn't have the opportunity to leave the house. He even helps his friend's grandmother who coincidentally suffers from multiple sclerosis as well.

He offered his friend who is going to school to become a certified nurse's aide that if he needs assistance to just call any time. His assistance doesn't stop with care, given that a large portion of his life has been spent on caregiving, he is able to give advice based on his experience that wouldn't be taught in the classroom.

Meet our Caregiver of the Year Award Nominees.

Meet all our NCC19 sponsors: