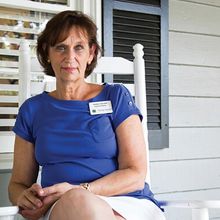 Tell us about the nominee's caregiving story.
Pam Van Ahn has been a caregiver her whole life – both as a nurse and a single mother. She moved to Atlanta in June 2011 to become her mother’s roommate and caregiver. Around that time, her mother was wrongly diagnosed with Alzheimer’s. Pam’s family was only able to find out after her death that she, in fact, had Lewy Body Dementia. Her mother died exactly a year after she moved in with her.

Pam reluctantly recalled her relationship with her mother as complicated and never easy. Her mother had a strong personality and could be intimidating. When caring for her mom, Pam often felt like she had stepped back in time to her 12 year old self. Although Pam only took care of her mother for a year, she remembers it feeling like an eternity. However, she took care of her mother because she wanted to, not because she felt any obligation. She admits that she made mistakes while caring for her mother, but she has no regrets because she was able to be there for her when she needed it most, and the evolution of their relationship changed both of them.

Through her caregiving experience, Pam was able to get to know her mother in a way that she wouldn’t have been able to otherwise. As her disease progressed, Pam saw the real person behind the walls that her mother had put up, and started to see her as the vulnerable, polite, sweet woman that she really was. Taking care of her liberated both of them from the difficult relationship they had had with each other.

Tell us about the support the nominee provides. What makes it innovative? How has the support made caregiving easier or better?
After her mother died, Pam and her siblings created Caring Together in Hope (CTH), which funded respite care and connected dementia caregivers with resources and professionals. While working in this space, Pam came across the concept of a Memory Cafe, but soon realized that it wasn’t a physical place. Pam knew she wanted to make it real, and create a brick and mortar building where people could gather and break the isolation they experienced as caregivers.

Amy’s Place came out of a need for a real community space, not just another support group, that Pam identified while going through her own caregiving experience. She had moved from Minneapolis to a conservative enclave of metro Atlanta to care for her mom, so felt alone in a new and unfamiliar place. Though she liked the support groups she went to, she found that the support group model of taking turns telling your story and then leaving didn’t help her to build real friendships. At Amy’s Place, caregivers meet each other and walk out the door as friends who call each other at night, who meet up for coffee when their schedules allow, and who even share caregiving duties from time to time.

Since opening in March 2016, 2000 people have come through the doors of Amy’s Place. They have hosted 336 events and the best events always involve music and dancing – at the holiday party last December, the floor was shaking people were dancing so hard!

Pam says, “I would often ask myself,’What is the reason mother had to endure this terrible disease?’ Now I know. Amy’s Place allows us to pay it forward and use our experience not to offer help, but offer to families an opportunity at connection, friendship, and community.”

How does the nominee inspire others?
Pam inspires others to continue with their caregiving, to be realistic and honest about the difficulties they face, while also encouraging meaningful connection and relationship building. She swears the families she serves inspire her, but she’s a powerhouse of inspiration for us all.

Over 10 years ago my dear wife began a voyage with dementia. We faced stormy seas. At some point we discovered Amy’s Place. A protected port in the storm. There, I was helped to plot a course for Carol’s crossing of the angry sea, to circumnavigate some of the rocks and shoals, not all, but some. I found guidance and education as well as friendship and fellowship. At first, I was apprehensive to open that front door, to open my heart, and to share my sorrow. Now I find it a welcome respite. An oasis that, for just a while, I have an opportunity to NOT think. Not think of where this ship is going nor of when it may pull into its final port.

Amy’s Place is an island where I don’t have to explain. Everybody there is a crew member on the voyage; we are on the same boat. Sometimes we loved-ones and family are mere passengers in a raging tempest, it may seem to us that no one is manning the tiller. There is no timetable, each passenger and crew member will view this voyage differently; and will trim the sails to different winds. But, Amy’s Place lets me catch my breath, perhaps see a landmark, get my bearings or stretch my legs on dry ground –even if just for a few minutes– before I return to stand my watch.

It is sometimes a lonesome and painful duty, but I know that my shipmates at Amy’s Place are always there to share an oar with me, help me bail the bilges and throw me a line when I am nearing the rail.

As the caretaker of my wife for a few years, I was looking for a place to be able to go where she would find a reason to laugh again and enjoy whatever time she has left. At no time did I imagine the joy that she would find there, and a new reason for living. She finds the love she needs, beside mine, and asks every day if we are going to " the house. " Amy's Place has created a new life for her. The atmosphere makes it easy to relax and enjoy being there. The people are great to deal with. It is a pleasure to go there.

Writing a testimonial is new to me, only because I have never before had dealings with any organization for which I could do so, without having reservations, until now.

Years ago when my wife was in the early stages of her dementia and I was her sole caretaker, I tried multiple facilities and day care centers, purportedly planned to keep the enrollees emotionally, mentally, and physically involved, first to retard the rate of progression and also to permit the caretaker to have some worry free time for some other things. I regret fully that I found them wanting in many areas.

Somehow or another I heard of Amy’s Place and decided to see what it was like. The moment we stepped on the front porch there was an immediate change to my wife’s demeanor. There was the smile that I had not seen in a considerable while. Her shuffle was no longer and she seemed to glide to the front door. Then from my point of view, a miracle occured.

The first person we saw when we entered Amy’s Place was Pam and my wife and her formed an immediate bond. I was astounded by the way Pam greeted and immediately understood Naomi. I was convinced that here is a woman who really cares and is knowledgeable in her area of expertise.

Amy’s Place is like no other place I have heard of or been to. It is open to all at any time where you can get conversation, advice, knowledge, cookies, and coffee. Additionally, every month they have scheduled activities that are not only tailored to those who have some form of dementia, but are also beneficial to caregivers, those of us in need of support. I have heard that the mind can only absorb as much as the seat can stand and also that seeing is believing. In closing I say come on down and see for yourself.