A Caregiving Comfort: Back

A Caregiving Comfort: Back 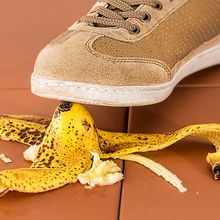 Sometimes, you dread what could drop.

You can hear the swoosh of the other shoe that's about to drop which will ruin the day, change the plans, spoil the status quo. Ugh. If you only could catch the shoe before it drops.

You know what your sister will give during the next family get-together -- feedback. If only you could change the subject before you become the subject of the conversation.

Sometimes you just want to throw back the shoe and give away the feedback.

Let's definitely toss the shoe. What if we gave thought to the feedback?

Some feedback is just wrong -- it's neither appropriate or possible or logical. Some feedback, though, is too right which makes us feel wrong which is why we want to ditch it like a hot potato. It's the feedback which sounds like criticism but really is the truth that can be so difficult to catch. It's the feedback that offers the correction we need to get back on the right path. But, it feels like we're wrong if we need to change paths -- and we don't want to be wrong. If we're wrong about this path, could we be wrong about everything? So, we keep to the path that's wrong because we need so desperately to be right.

Seems like you know me....especially with this one. Thanks for the perspective.