A Cold Winter Ahead

A Cold Winter Ahead 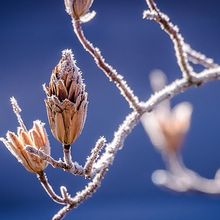 Thursday night. Classical music from WSHU in my ear buds.  Carol in bed, but not yet fully asleep. She breathes loudly through her mouth.  I imagine her nose is stuffed.  Nothing I can do about that.

And the sound reasserts her presence.


It’s been almost a week since last Friday when I came home to find Carol ill.  She has been better since then, but the incident has awakened concerns I have been keeping at bay but which now insist on being addressed.

There are two such, intimately related and one or the other will happen: either Carol will predecease me, or I her.  I've dealt with the second by setting up a trust, but not in the manner in which it might occur.  That is for another time, perhaps the next post.

The first, which I confront now, involves the prospect of my living alone into old age.

Some people experience a version of living alone as young adults moving out into their own apartment either when getting a full time job or even renting a place while in college as an alternative to dorm living.

I did neither.  I attended a college about a mile from my house and across the street from my high school to which I had walked rather than take the bus.   I spent my undergraduate years in my parents' house, first walking and later occasionally driving my '52 Packard to college.   In graduate school at the University of Connecticut, I lived in a private room in a dorm.  That was a small step toward living alone.  Then I married.

It was when that marriage ended that I fully set up housekeeping for myself, renting an apartment and furnishing it with second-hand pieces bought from a colleague who had gone through his own divorce and had the furniture in storage.  I still needed a bed so working in the theater shop at the college where I was working I built  platform variety of one with a bookcase for a headboard.

So, I was now living alone.  It did not seem difficult because in many ways my life went on in its usual fashion.  I went to my to my job as a professor and administrator.  Part of my old married life continued into my single condition as on alternate weekends I had my two daughters with me.

Of course, this was a difficult, stressful time because of the impending divorce, but I didn't fret about my solitary status.  I was still relatively young.   My life lay ahead of me and I was going to reinvent myself in my relationship with Carol who soon became the center of all else that whirled around me.

And I was still rooted in New York among friends, colleagues, familiar geography and  close to my daughters as they grew up.

After a while, Carol and I lived together, then married after my divorce was finalized,  and my solo living ended.

Now, however, it is possible that I might find myself in my twilight years living alone in northern Michigan, a thousand miles from what I've left behind in New York: two daughters and grandchildren, as well as several very long-term friends.  It is also likely that my daughter with Carol, who is now living six hundred miles away in Minnesota, will wind up someplace other than here.  And although I have lived here for sixteen years, my roots in this foreign territory are still quite shallow, the friendships I have made not yet fully matured.  All in all a very different set of circumstances than I experienced long ago.

A chance encounter put this speculation into focus for me.

The other day I ran into a neighbor on the checkout line in the grocery in town.  My relationship with him falls somewhere between an acquaintance on the one hand and a friend on the other.  Like Carol his family has been on this peninsula for a very long time although more as hoteliers than farmers.

We chatted a little.  I asked him what his plans were for the winter, a pretty standard topic of conversation hereabout as our winters are long and difficult.  The local population divides into categories of those who head to warmer climes for the whole season, those who leave for a few weeks, and those who stay the whole time.  Carol and I fluctuated between the second and third categories, occasionally traveling to Florida for a break from the snow and cold.

He said he planned on going to Texas to visit a friend, and then to Oregon to spend time with his son.

Why this conversation was more than social chatter for me is that he is roughly in my age group, perhaps a little younger.   His background is, I believe, in psychology, perhaps as a counselor or therapist.  He is also an accomplished painter whose works hang in the gallery attached to the Tavern up the road from here.  He's a good enough handyman to maintain his family’s rental cottages, he is something of a sailor, and also has a second place in town.

None of which is why I am talking about him.

Rather, I see in him what I might become down the road, living here as a single older man.

In that respect his travel plans for the upcoming winter indicate the freedom of movement such a person enjoys as opposed to the limits on my movements imposed upon me by my care giving responsibilities.  The question in my mind is whether enjoys is an accurate word to attach to my expectation that I, too, might be as free as he appears to be to deal with the winter as he likes, and more generally, to do what he wants to do when he wants to do it.

Having now years of experience in northern Michigan, I imagine living a solitary existence on this snowbound peninsula with the winds howling in off the waters of the bay and through the less than perfect seals of this old farmhouse would be challenging if not depressing.  So, perhaps should I find myself in that circumstance  I would also travel to visit children and grandchildren or a very good friend at whose wedding I was his best man, a friend who happens to live in snow free Florida.   In warmer weather, I could visit another good friend now in Syracuse, or ones back on Long Island, or even an older friend who lived across the street from me in Brooklyn and is also in upstate New York in Utica.

At this point, however, hearing Carol’s heavy sleep breathing not ten feet away, I cannot even begin to tolerate that thought.

I do not know my neighbor's story, how he came to be an older single man.  He does not appear to be at all unhappy with his life.  Perhaps he is in a relationship, but I don’t know enough about him to begin to guess about that.

It might be worth talking to him at some point.

But not now.  It is too damned distressing.

I can relate to this both from watching my mother live life after Daddy passed, but also as I wonder about my own future. I was divorced after 31-years and at that point was just beginning on my caregiving journey with both parents. My mom used to pray that my dad would pass first because she knew he couldn't live without her and I agree. But watching her walk through her days, it saddens me. So much of who she was was tied up in caregiving. All her life she cared for family; her children, friends, others, and then my dad for the last 10 or so years of his life. She's lost now. She doesn't know what to do and has no one to care for really and not much ability to do so. What I see in her though is someone who is truly just living each moment as it comes. There doesn't have to be a plan anymore. Nothing has to be thought through too far. She still experiences joy and is beginning to have hope as well. She moved in with me in June. I love having her here. \n\nAs I walk this journey with her, I also wonder about my own future. I've no time and no energy to date (though mom would love it if I would). I desire a relationship again but I know it might never happen. For now, I carry on as my mother always did - just one foot in front of the other. That's all any of us can do.

I could relate to this in so many ways... but not with the prospect of losing my spouse. We are about to move across the country and away from everything and everyone we've known for most of our lives. My caregiving duties, while not completely at an end, will be lessened considerably since my dad passed away last week. I'm excited, nervous, terrified, can't wait to go, and feeling guilty because I can't wait to go. I will join those others who care for a parent long distance. \n\nThank you for sharing your beautifully honest stories!