A Lesson Dad Taught Me

A Lesson Dad Taught Me 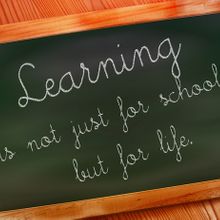 When dad was going through his chemo treatments, it soon become a point where he had no desire to see it through. I couldn't really blame him as my mom had died during his treatments, so I understood where he was coming from. Dad had cancer years before that required him to have half his bladder removed. When the cancer returned this time, dad had started chemo with a strong will -- my mom had suffered a massive stroke a few years earlier and was paralyzed so she was dad's motivation. He needed to get through this so he could care for her. Her sudden death rendered him with zero motivation and will. But he continued.

When it was determined that the chemo wasn't working and the remaining portion of bladder needed to be removed, dad surprisingly said, Okay, lets do this. Together we learned what having an osteo bag meant, how things would be different for him, how to clean and maintain the stoma. During the exams and such prior to surgery, the doctors determined that Dad's cancer had also spread to one of his kidneys. We talked at great lengths about how dad felt about removing the kidney along with the bladder -- would he be happy, what are the side effects, what now kind of conversations became the norm between him and I. In the end Dad decided that yes, he would continue with the surgery and also have the kidney removed.

Dad didn't recover from the surgery as well as they had hoped. He had many, many days were he was still weak and sickly. This went on for what seemed eons before he started to notice the blood. My heart sank -- I knew it was cancer again but I was in a wee bit of denial. I wasn't prepared to start the what if talks again. I didn't want to be the one dad turned to with his worries, his questions. Since mom had died, I was the one he turned to during this ordeal. It changed our relationship from father/daughter to a more generalized support relationship. I was the one he called when the stoma hurt, when the bag overflowed, when the cancer in his prostate along with the sight of a bag brought questions of a sex life to his mind and I definitely did not want to have these talks. I was tired -- I wanted to mourn mom's passing and get back to my life. Not talk about ANY of the crap he called me about. I'm sorry but sex convos between me and dad just were NOT going to happen! I needed a cave and I needed one fast.

But, cancer had other plans.

When the doctors confirmed that the cancer was indeed back, and that dad's remaining kidney needed to be removed we had long discussions. Dad was against going on dialysis -- he felt that this should be an option for someone much younger than him. He was tired and he'd been through enough. So, when I took him to the doctor's appointment I was as prepared as a daughter could be for Dad's disclosure to the doctor that he'd had enough and that he wasn't going to go forward with more surgery. I thought I was strong enough to handle this, but when the doctor walked into the room I could feel my emotions rise into my throat. What a horrible conversation I was about to be part of. When the doctor was finished with his speech, he said "Bill, what do you think?"  Dad looked at me and said, "Okay, let's do this."  My mouth dropped! With tears in my eyes I said. "WHAT!!!" My dad, grabbed a hold of my hand and said, "Quality sweetheart, I just want some quality. I don't care about quantity, but what I just heard from the doctor was that having this operation was going to bring quality into my remaining time and that is all that anyone can ask for."

Quality. That's it -- that is what it is all about. The words my father spoke reminded me of the saying, "Life isn't measured by the number of breaths we take, but by the moments that take our breathes away." Quality!

Sadly, my father never did find the quality he had hoped for. He passed away a few short months after the final surgery but his words stay with me to this day. I remind myself to make the most of the moments and to enjoy the time. No one knows for sure about the quantity of time, but we can all do our best to find quality.

As hard as that is some days, it's a goal I work to achieve.

What a brave and amazing man. I pray your heart and mind are at peace.

My mom died a little over two weeks ago, following a surgery which was also about \"quality, not quantity\". It did neither for her.\r\nI am only just becoming aware of the very many lessons her last year, and death, hold for me. And how I have changed myself in response. I may never really figure it all out.\r\nPlease accept my sympathies for your loss.