A Room With A View

A Room With A View 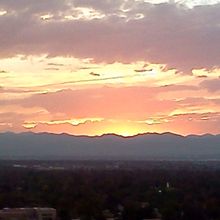 hter was in the emergency department this time, things moved quickly. No more quick judgments, the doctors had called ahead and made sure there would be tests ordered. She had a CT scan almost immediately and blood tests. Suddenly, our concerns were taken very seriously.

Eventually, she was sent up to her room. The first room she was in was on the 11th floor, the penthouse where we had a most spectacular view of the sunset. Emma had taken time to prepare for her stay, taking a shower and packing clothes, toothbrush, comb, and other necessities. I was the impatient one and I packed only my toothbrush and my medication. There was no question for me about whether or not I would stay with her. She's had other hospital experiences and I've always stayed with her. It took a few days before it dawned on me - Emma is 24 years old now, maybe she didn't want me there. She laughed off my concerns and said she was glad I stayed. Whew! The hospital is 15 miles from our home. It's a long haul in heavy traffic.

Here, I must add something. Emma made a conscious decision to be as positive as possible throughout this process. She wanted to make sure she was pleasant and polite to the nurses and doctors. She didn't want to make a huge deal out of her illness.

That evening, the attending doctor from the family medicine clinic came by to let us know what would be happening. The next day would be filled with tests and preparation for a colonoscopy. Though this didn't sound like loads of fun, we were almost giddy with nervousness and relief at the prospect of finally finding some answers. And, as I said before, the view was spectacular. The downer for Emma was she wasn't allowed to eat anything that night.

Over the next two days, she had a CT scan with contrast, a colonoscopy, and an MRI with contrast. There were more tests scheduled for Thursday morning, but they were cancelled. The docs had gotten test results back and had their answer. Emma had advanced Crohn's disease with abscesses and fistulas which were threatening to spread the inflammation and infection throughout her digestive tract. She needed surgery to remove the diseased portion of her intestines and, while healing, she would need to have an ostomy. She was too malnourished to heal properly without giving this portion of her intestines a long rest.

Malnourished. Could there be another word which could make a mom whither in shame? I had to remind myself, it wasn't that I wasn't feeding her properly. Her system wasn't able to absorb nutrients. Emma had to be reminded, too. She has gotten all sorts of flack for being ultra thin. No, she's not dieting. This is just the way she is. 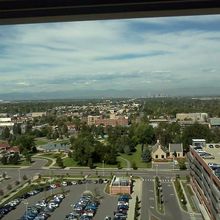 Before the doctors left, the other scary word came back to us: ostomy. Emma was expected to have an ostomy for 3 to 6 months after the surgery; after which, she would need more surgery to reverse it. Pooping into a bag hanging from her belly. Just what a 24 year old, who is just starting to date, wants to hear. She cried, she swore, and cried some more. Then she joked about it and got philosophical and said some wise things. She was still determined to stay positive. On Friday, we met the surgeon, who put Emma on a liquid diet and ordered IV nutrition therapy. Delivered into a larger, deeper vein, this nutrition goes straight into the bloodstream without having to be processed by the digestive system. It gave her gut a break while building up her strength.

She would have surgery on Tuesday, Aug 22. We had 3 full days to wait.

We took a lot of photos of the view. We had a lot of friends visit, which was so lovely! This distracted both of us from thinking about the surgery and, well, we had to show everyone the view. We also happened to be directly under the helicopter landing pad, so when they took off, sometimes we saw them right in front of our window. Mixed blessing, but our friends enjoyed it!

Thanks all! I am so grateful Emma finally was admitted and tests done. We might not be thrilled with the diagnosis, but we have a forward path now!

Goldie, no medical diagnosis or hospital stay is ever what we want for our family. I am so grateful that you have a plan to move forward now and also that you know her malnourishment was the disease. You are such a loving mom and I can't imagine the pain of watching your child hurt. The beautiful view sounds like it provided a place for peace and contemplation during a rough time and reflects the positive love in your daughter and for your daughter...will pray for more beautiful views (from an entirely different location!) for you and your daughter.

I can imagine as her mother, you would anything to make her pain go away. I'm glad you had the satisfaction of knowing you were being taken seriously and at least had a goal to work on together,

I read this post with happiness and gratitude. Finally, action. The diagnosis is not a fun one but the alternative was not working either. Crohn's is a lousy diagnosis but, as a mother, I would be overjoyed to have an answer and a path to some recovery. I look forward to hearing more from you as the days go by. Yes, having one of those bags does not sound like fun. A friend of mine who is in her 60's has a permanent one now. She has the same diagnosis and has been coping with it for years. Her daughter told me that her mother had a difficult time accepting the need for a full-time bag but has grown use to it and has moved on. Your daughter must have been utterly miserable. I am glad you got a room with a view. I love that you can see the perks in all of the seriousness. That is a gift.

Hugs &amp; Prayers to Emma and you. Hard news to get , I'm sry! Im glad the doctors figured out whats going on and can better help her now. What awesome views to sooth the soul, during your hospital stay!.