A Show of Solidarity at Safeway

A Show of Solidarity at Safeway 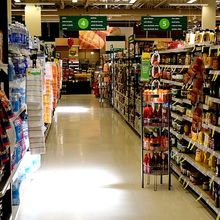 I took Grandma grocery shopping today. She couldn't decide whether to go to Walmart or Safeway. As she sat ruminating, I contributed my (admittedly unasked for) opinion -- that Safeway is just more civilized. Which it is, far more than Walmart. Maybe, somewhere, is a town where Walmart is an oasis of calm and civility, and Safeway is utter pandemonium. But that ain't the case here. She nodded her agreement, and with a bright smile, remembered that her pharmacy is also at Safeway. "I'll get a flu shot while we're there!"

And off we went. It was busy there of course. Grandma can't be up and ready as early as I can, so our shopping trips together get a later start. But it's okay, cause, like I said, this is Safeway. Not Walmart. Even when it's busy, it's not nearly as nerve-wracking.

After the flu shot, I got us a shopping cart, and we hit the aisles.


We were stopped in the cereal aisle, while Grandma squinted at, literally, EVERY SINGLE BOX of Special K. Every last one!

And from the opposite direction came an older lady in one of those motorized mart-cart things. (Those make me very nervous, ever since I got my foot run over by one a few years ago) She was followed by a man about my age, pushing a heavily loaded shopping cart.  The aisles at Safeway aren't terribly narrow. But we still came to a standoff. The other lady inspected the offerings on her side of the aisle. And I, knowing Grandma's likes and tastes fairly well, recommended a choice which, thankfully, she approved. We got underway, and I gave the man facing us a wry smile and a small shrug -- my attempt to communicate, "Sorry! But, what can ya do?".

And he, God bless him, gave me a big smile. And a thumbs-up! He understood. Because he's not only been there himself, he IS THERE. Just like me. He, like all of us here, "gets it".

I wish I could have taken a moment, to thank him for that very brief, very meaningful gesture. But Grandma was already shuffling off, and his mom was powering onward.

Thank you, fellow caregiver at Safeway. I promise to pay it forward.

Hurray for \"Sign\" language with a fellow Caregiver! What a blessing it is to see another! I agree with you about WalMart, I stay away for the most part! I'll pay more and go to Safeway. Your Grandma has such a blessing in you as you allow her to \"browse\" in her time! So glad you shared this!

This was awesome! Thank you, Desiree!!

Oh, so familiar to me! I take my dad every week. He rides in the electric cart, too, but he tends to grab as many packages of cookies as he can before I notice. Isn't it nice to have that moment of connection with someone who understands?