Goldie
It's been a long couple of weeks. I'm not so fond of being a caregiver right now, but I'm even less fond of suddenly turning into a caree. I'm slowly getting back into my usual routine after really crashing. Part of this is my Parkinson's, but usually I have the stamina to get things done. Today, a short trip to the thrift store was almost too much.

A week ago, I crashed hard with a severe headache that made me very sensitive to light and very queasy, dystonia (where I twist up and cramp and look like someone who lost in Twister), and dyskinesias (involuntary muscle movements). The dyskinesias lasted almost two hours. My husband came and sat with me, rubbing my back and reminding me it would go away eventually. In the back of my mind, I kept thinking, just take me to the ER and let them give me some morphine, but I knew that wasn't a good idea.

I'll go in to the doc on Tuesday and see if she's got any thoughts. Me? I think I might have a kidney stone. I could be wrong.

The only thing I managed to do as caregiver was to pick up mom and dad's meds from the pharmacy and deliver them to the nurses at the facility. I cleaned a bit in their apartment, but that was the day I really crashed, so I paid for  it.

Now, whining is over. I'll be fine. What I've been thinking about a lot is how to go forward and find a way to actually interact with my mom that's not a doctor's visit or cleaning house or watching HGTV with them. Mom doesn't really do anything. I don't think she is cognitively capable, though she sounds really together. She wants to chat. I don't want to chat. I don't know what to chat about with her. I need to have a plan - a chat plan? 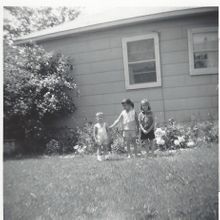 try. Dad was transferred a lot and, well, some of the companies he worked for went out of business. We lived in Oklahoma, Nebraska, Colorado, Montana, and Wyoming. I've been trying to match photos of houses to where we lived (most of our moves were before I was 7) with only moderate success. I can't take the photos over because I would never get them out of the apartment again.

I'm in a lull, you see, and I know it. I want to find a way to enjoy this time when I don't have to run them to appointments several times a week. Everything is set for the next eight months -- which is when they'll return to medicaid and have to change doctors one more time. I know a lot can happen in eight months, but I have to plan for them still being here. Things will get crazy again then, I know. We've been through this cycle.

Until then, I'll rest up.

Goldie, I am so sorry to hear about your \"crash\", timing is everything huh! Your photo idea is such a great one! A photo album might be easier to bring and take back with you if you have pictures in one. Maybe extra pictures that wouldn't hurt if they were left with your mom or thrown out?? I dumped a bunch of pictures onto Elly's lap last week. I think she enjoyed the job of going through them. I hated to throw out pictures of flowers and quilts - from her garden and quilting days!

Goldie I do understand about nothing to talk about with your mother. My mother's dementia a few months before she died we could only talk about her growing up or when she and my dad met and dated. Then we would talk about how she was always there for me when I grew up. She had no short term memory so we talked about the old days. She found great comfort in that as I did too. As she got worse, that was the only thing that calmed her down. Ask all the questions now as once they are gone you will never find out. I miss that now as there is nobody that can answer my questions.