0
So after the last tandem trip to the super market, I swore to myself and my kids that I would "never again" take my husband grocery shopping.

Here, where I live, we were told on Sunday that "the storm of the century" was bearing down on us for Monday. I had a bit of food in the house and figured I'd stop at the store when I left work on Monday and all would be good. My husband insisted I go on Sunday and pick up "necessities".

Now our local supermarket is crazy on normal days but on a Sunday, the first day of sales from the roto, it's an absolute madhouse. Add to it the panic that set in with the predicted storm and it's not a place anyone would want to be. And I told him so.

He commented under his breath.

The smile on his face was like a kid in a candy shop and he excitedly said, I'll go with you!

I snapped,"Oh no. By no means on this earth are you going along! It's going to be totally crowded with crazy people, it's going to take forever and I don't have enough money to take you along."

He looked absolutely crushed as I walked out of the living room and went to change.

And THAT ate at me while I changed and got ready. It was so bad that by the time I finished, I went back to the living room and said, "Fine, you can come but no running people over, no complaining about the stupidity and no putting extra stuff in the cart!"

Between the smile on his face and the spring in his step, I thought he was going to literally jump up and down for joy! (Yes, seriously).

So I drove us there and we started shopping.

As I had predicted, the store was mobbed and shelves were emptying fast. I grabbed a loaf of wheat bread and he says, Can we get a cheap bread (pointing to a store brand $1 loaf). I asked why we needed two loaves of bread and why a loaf of white (I'm trying to get him to eat healthy) and he moped. I threw the bread in the cart and we went on. Then he turns to me and said I should put it back because he needed cereal. I told him "just drive."

So, in the next aisle, he pretty much ran a woman over. I apologized as he blew past her. Two aisles further down, two young mothers were chatting and partially blocking the aisle. He stood with his hands on the cart and actually snorted multiple times until the one mom apologized and moved over. He almost ran her down as he blew past them with me running behind trying to make sure he didn't actually kill someone with the cart.

Twice more he almost ran other shoppers down. I finally told him we had to go. We spent over $100 and basically had a package of meat for soup, some cheese for quesadillas and grilled cheese and sauce for pasta. Yes, seriously. If this huge storm actually hit like we were being told it would, we would be living on I'm not sure what. (He would be eating toilet paper since he told me that's all he really wanted.)

At the check-out, the local high school students were bagging as a fundraiser and he stood next to the poor child we had and micro-managed her bagging efforts. (I put extra money in her bucket to make up for it.)

Monday, as I left work because of the storm, I was back at the grocery store getting what I didn't get with him along - and paying dearly for it since the pickings were v-e-r-y slim.

Told my girls: Don't EVER let me take him shopping again. Shoot me. Beat me but somehow stop me.

They are going to ban me from the store because of him. 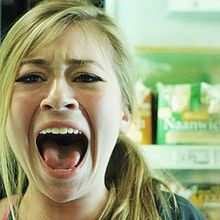 I know the feeling but not just for shoppibg .my husband doesn't go with me anymore... Thank God.\nI would be doing the shopping and right in the middle he would say I want to go home I've had enough so we would check out and than get home and I would have to go back out.double work, time and not to say the very least more money. \nHe has a power chair and when he does use it runs into everything ... I don't understand why he is always in hurry.\nSo much work taking him out. Best of luck on your next excursion.

These stories bought a smile to my face as it reminded me of the times I would go shopping with my Grandfather. He would constantly compare prices. The worse was when he would let out a big fart in the middle of the store!

Ugh - I feel for you. It's hard to say no, but it sounds like the cost of saying yes was way too high in this case. Could you try taking him to the store with you before work some morning when you'd pretty much have the place to yourselves? My favorite time to shop is 7:00 a.m. - though it's a rare morning I actually make it out that early. Or maybe there is another store that has something better about it - wider aisles, less people, more understanding employees? I'm thinking about <a href='http://www.caregiving.com/members/janshriver/' rel=\"nofollow\">@janshriver</a> taking her mother shopping and having an easier experience. Good luck to you!

You got a double whammy -- shopping with the husband AND shopping pre-storm. Anyone's sanity would be tested.

Oooohhhhh!! I would have done the same thing: Said \"No\" and then invited him along. \r\n\r\nIt's soooo hard when he wants to join you!\r\n\r\nI hope the cheese quesadillas were good??\r\n\r\nI feel for you. It can just feel like an impossible situation to manage.