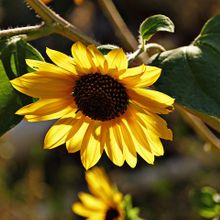 A couple days ago, I posted about my disabled sister, Annette (Read "I Feel Like Screaming and Crying at the Same Time!"). Thank you to all who commented. I truly appreciate it.

Just for an update, my sister is feeling much better, antibiotics are working. Feeling well enough that she decided to go straight to the administrators office and ask for the staff bathroom key. When he asked why, she told him about the poop on the only available 2 toilet seats she is allowed to use, and told him she had pictures if he wanted to see. They cleaned the toilets immediately.

She is still at the same facility, and more than likely will have to stay there. I did talk to the Ombudsmen, she is checking into a couple of things and investigating the facility. But between my sister's age and psych issues, the facilities are few and far between… like almost none. When you aren't in the "mainstream" of diagnosis and age, it is tough.

I know this all too well, as I also have a brother who had encephalitis at age 4 that left him with brain damage and  developmental disabilities. Oh, the ongoing struggles my parents went through, with no understanding of his limitations or any support systems or programs to help him! People then openly made fun of the disabled and I grew up hearing kids (and our bus driver) taunting him and calling him "retard". I believe my sister Annette's mental health issues stem from the ongoing stress this caused. She was 2 years old when my mother was continually gone at the hospital with my brother. Once home, he was like an infant again, couldn't walk, talk or even sit up. He had to learn these over. And to make matter's worse, my mom was pregnant with No. 5.

I think by sheer birth order and the overwhelming demands on my parents, she missed some critical attention needed as a toddler, specifically the attention needed that helps form the ability to self calm and develop empathy. She has neither. The least little bit of pain she goes to the ER and wants pain killers and has the need to have some type of problem. Well after a lifetime of self destructive behaviors, she does have real and serious medical issues. She grew up seeing how much attention my brother got from all his problems so I think she internalized that this is the way to get the attention she craves but can never satisfy.

That makes her overwhelmingly trying. She has cried "wolf" so many times, that when she really needs help, no one listens because she has exhausted everyone. My sisters and I have pretty much learned what's real and what's not, but she can still be so exasperating! She also quickly exhausts staff. So there in lies the rub!

A flitter came across my mind, about her living with me, but then I remembered what my brother-in-law recently said regarding that if she were to live with him and my older sister: "it would be murder-suicide". TRUE. She is that infuriating. Even though I understand her, I know I can't handle her. Just a short phone call at times I want to choke her!

If someone were colorblind, would we expect them to pick out a color when asked?

When someone is incapable of empathy and understanding how their behavior affects others (and themselves), why is it so hard to come to terms with that. Mental illness isn't visible and still not understood.

To me it is similar to Alzheimer's: When Mom would not remember something and my sister would say, "Mom, don't you remember______" .   The whole point is NO, SHE DOESN'T REMEMBER, that is the disease and after awhile you come to accept that.

With my sister's issues (because she is smart and so talented), it's been a lifetime of trying to "get it" and accept that she has something "missing".  And it is so sad that this is probably the best that it's gonna get.

Hi Jean--It sounds like your sister is a good advocate for herself, too. I love how she got the facility to take action. Good for her!!\r\n\r\nThank you so much for telling us about your bother. My heart breaks, though, for all that he (and all of you) endured. I can't even imagine. Is your brother still living?\r\n\r\nSo interesting to think of your sister's reason why. Why is she the way she is? It sounds like you've hit the nail on the head. She copes in the way that she assumes is coping without realizing it's anti-coping. :)\r\n\r\nPlease continue to keep us posted.