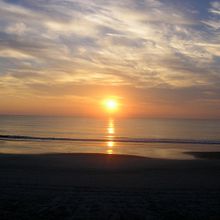 Denise asked me a couple of weeks ago if I'd mind answering a few questions about after caregiving ends. I didn't mind. She thought it would be okay if I posted it at the site. I hope you all don't mind. It's now two weeks later and it's still difficult. But I have been attempting to socialize again. I've gone out to dinner with friends, went to a house concert, went for a manicure and pedicure with another friend, I've resumed my regular massages (I had six pre-paid massages waiting for me), and had a wonderful lunch today with Denise and Pegi. It's strange doing all these things without Richard. It's strange just doing all these things outside the home - it's been since February that I've pretty much been 'confined' to the house along with Richard. But every day gets a little easier. As Pegi and Denise can attest, I still cry often when I'm asked about Richard or offered condolences. I don't know what else there is to say.... (She also suggested I post the words I wrote for the celebration of his life we had last Sunday. I'll do that another time.)

What has been the hardest time for you after caregiving ended?

The hard times are different at different times. There is no ONE hardest time. Immediately after he passed, it was hard just accepting that Richard was no longer here in the physical world. The house was empty. Getting into bed at night those first few nights knowing that I’d never again be able to hold his hand, or kiss his forehead, or run my fingers through his hair - those nights were hard. As the days pass, I’m learning to adjust to the empty bed and empty house, but I hate the finality!

For almost a year I felt like I was living in limbo – knowing deep down that he would never get better, but still praying for a different outcome and trying to be positive. Living for months not venturing far from the house, and only going for necessary trips (grocery shopping, picking up and delivering work, etc.) Looking forward to the time I’d be able to live without those restrictions, and feeling guilty for wanting to be free to live again. But now, two weeks later I’m in a different kind of limbo. There are so many things that need to be done, but can’t get done till I have death certificates. (They take forever). From the normal, like notifying the insurance company to the little things like cancelling his cell phone service without having to pay an early termination fee, and even Facebook requires proof of death to “memorialize” a Facebook account.

I could say that the loneliness is hard. The boredom is hard. Both are true. But are they the hardest? No. I think right now, today, the hardest thing for me is the wait. Waiting for those death certificates so I can take care of things and move on. Tomorrow , missing him might be harder still.

What is helping you the most?

What’s helping me the most getting through the days (and nights) is staying busy.  I’m a graphic artist/
typesetter and I work from home and have for many years. I do several monthly publications, so there’s rarely a time when there’s not work for me to do. So when I can’t sleep, or the house feels too lonely, I escape into work. When I’m busy I don’t have as much down time to think and reflect and miss Richard. Is that healthy? Probably not. But work has always been my escape and it’s how I get by most days. And, I’ve been planning a celebration of Richard’s life. It’s this coming Sunday. So I’ve been busy organizing that.  I‘m wondering how I’ll feel when I won’t have that, or anything new to keep me distracted.

What advice would you offer to a family caregiver during their first few weeks after their caree’s death?

I don’t know that I can offer advice, because I’m still trying to cope. The first couple of days I didn’t think I’d ever stop crying, even though Richard’s death was expected. And everyone said that it’s okay to cry. The show of sympathy, the cards, the sentiments, the offers for help – all of those brought more tears. And each time someone shows compassion, fresh tears fall. Then there were days when I barely cried and I thought that I should be crying more – after all it was only a few days that he’s gone. But what I’ve heard is true. There is no right way to get through a death of a husband (or a parent or a child or any other caree). And there is no wrong way. What worked yesterday to get through the day might not work tomorrow. You just have to learn to cope, and like the caregiving, this new roller coaster ride won’t last forever.

How would I describe my life right now?

My daughter (and 17 month old granddaughter) flew in 3 days after he passed. She said she believed I needed the distraction, the time to play with the baby. She said there would be so many people at the celebration that she wanted to come now, when I needed her, not when I’d be surrounded by so many friends and people wanting to pay their respects. Boy was she right! But as we were getting ready to head out  to go to the park, I almost went in to tell Richard I’d only be gone an hour. Then I realized he wasn’t here any more to tell and I didn’t have to only be gone an hour.  And the tears came. But those two days with daughter and granddaughter were EXACTLY what I needed!

So how would I describe my life right now? Day at a time, or maybe moment at a time. I’ll be fine. I am fine. I’m strong…  I sometimes just wish I didn’t have to be.

Thank you, Debbie, for letting us see your intimate thoughts and showing us what it is to be strong, even if it is sometimes moment to moment.