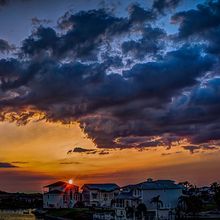 My dad sold insurance for a living, and the insurance industry uses that great term, The Big One, to convince us we need security against the unexpected catastrophes of life.

We can take care of all the henny-penny stuff ourselves but when  it comes to The Big One (the heart attack, the diagnosis of cancer, the long-term hospital stay) we will need help.

I used "The Big One" phrase to convince my mother that she needed help when we decided she could no longer live by herself.

She started seeing people who were not there about six months after my dad died. They sat in the living room. They held religious services in the neighbor's back yard. Eventually my mom called the police about people in her house and we started paying serious attention. She had already delegated her finances to me by sending me her checkbook every few months to iron out and by my trip to Florida every March to prepare her taxes. We hired my aunt to check up on her every day and keep her occupied socially. But when Mom called the police again about people sitting in her car, and the neighbors started to call me at work in Ohio with concern, we knew something more had to happen.

I made the decision to take a leave of absence from my job and move in with her before I got the Mom-Okay for the whole affair. I was full of anxiety on how to persuade her that this was the best decision. She insisted she was "doing fine", " feeling much better". I pulled The Big One out of the bag of tricks.

"Mom, you are doing very well in many things. All of us want the same thing you want, we want you to stay in your lovely house for as long as you can. But I don't want to be one day late, one day on the wrong side of The Big One. I don't want some guy coming in here, saying he's giving you an appraisal of your antiques and you get robbed. I don't want to be too late when some man says he's going to trim your olive trees and instead you get mugged. I don't want to be one day late of you having an accident in your car. Or you having a fall and breaking your hip. I'm here to keep things right for you for as long as we can. We need to think like intelligent adults, control the things we can control, make decisions while we are able to decide what we really want."

The appeal to her controlism and reason worked; it appealed to her dignity while she still had some. It allowed her to keep saying, "I think I'm doing pretty good".

Little did I know then, but that was the EASY PART.

I love this post, Jan. I love how you used the words and the mindset that your mom can relate to. I also love that you understood how important it was for you to step in so that you wouldn't have regrets. It's certainly a process that takes time and patience. Your process helps us all as we're figuring this out. :)

You are inspiring! Keep up the good work!