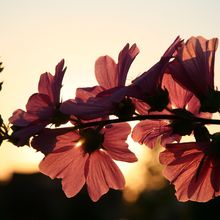 This morning, I saw Grandma dressed for going out. (On Saturdays she normally relaxes in a housecoat and slippers.) Need me to drive you somewhere? I asked. No, my brother had called last night to say he was coming up to see us.

Well that's just great, I thought sourly. Nice of  you all to let me know! I spent the next hour fuming, and planning to hole up in my room the moment he arrived. Then that little voice inside (the one I've learned to listen to, since it's always right) started telling me to just calm down, lose the attitude, and give him a chance.

So I did. Turned out, he and his wife had stopped at our parents' place first. And he'd seen, with his own eyes, just what all has been going on with them. With Mom.

He looked truly sad, distraught even. Told how yesterday, he'd gotten a call from our dad, asking if he were in the area. Because Mom had told hi how my brother and his wife had just been there, while he'd (Dad) been making a quick run to the corner store. Rather like the time she told me how Dad was deathly ill, and how could I have not noticed?

Yes, my brother saw it all. And so did my sister-in-law, a woman I really like and respect. While brother and Dad spoke privately outside, SIL got treated to a running monologue from Mom about how Mom never sees or hears from her kids anymore, they've disappeared from her life. (She'd seen, and spoken to, her son not ten minutes before.) And also how, a few days go,  she'd come  home to a house full of dozens of stray cats. Her own cats had invited them in.

We had a good long talk, brother and I. I feel  better for it, knowing that now he is fully aware of everything. And that he and I are on the same page about what should happen, or not.

I wish I could say that he also felt better. But I'm pretty much sure that isn't the case.

Thanks for sharing about about your brother. Sounds like the beginnings of some family understanding, healing &amp; support for you. Praying this will blosom into a positive thing for you.

Oh, gosh, Desiree, when I saw your title, I wondered, \"Who did Desiree's mom see now?\"\r\n\r\nI'm soooooo glad your brother and his wife were the visitors! I hope this brings more support to you and that you can look to your brother for understanding and, hopefully, help. \r\n\r\nI've got my fingers crossed this is a new beginning for you and your brother.