And It's Only Tuesday

And It's Only Tuesday

CatKBorn
Visited the local Agency on Aging over my lunch hour. Basically, we're not there yet. She has too much money and I don't have enough. So $20 an hour for home aide assistance would be out of pocket, which yes would spend down her money but she's so damned paranoid about her money that writing the checks to pay that bill would be a huge battle. So... holding pattern.

She asked me to trim her toenails tonight - which was BADLY needed - so I got her to soak her feet, was able to scrub them with a sugar scrub (expect between the toes) and get the nails trimmed.  Washed her face after dinner since half the dinner was on her face. Everything in between though - which smells! - remains uncleaned. Putting clean sheets on the bed and washing PJs so she had to wear a fresh pair last night seemed like an exercise in futility.

Had to practically force her to sit outside on the deck for a bit tonight. It was warm today - low 80s - and she was inside all day. She lasted about 15 minutes because - GASP! - Wheel of Fortune was on. Speaking of TV did I mention she completely controls it? I can't watch in my bedroom on the other TV either. She pitches a fit and pushes me down on the couch or tries to block my way out of the room if I try. Afraid to push back for fear of knocking her over or something. So... trapped. After working all day, coming home to make dinner, cleaning up her mess throughout the house (remember we don't wash hands so food and I don't want to know what gets spread to every surface she touches), laundry and whatever other chores need done I would really like to sit down and watch General Hospital. Nope. If she actually stayed put to watch it wouldn't be half as irritating. But she's up and back and forth and staring at what I am doing (dishes, cleaning, whatever).

Also, my Facebook page is close friends and family only. So now if I vent at all in venue I have a cousin who feels perfectly justified in bashing me for being "disrespectful" and "humiliating" my mother. This cousin is a nurse, she works in a long term care facility. Yet she doesn't get it. Not at all. Saying that I don't know what to do/how to respond when Mom does (fill in the blank) is "disrespectful" and "humiliating" is hurtful to me. Maybe it shouldn't be as this particular cousin has always been harsh with her opinions, but it does. 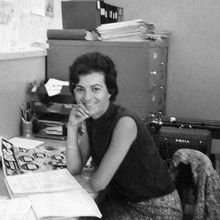 Mom when she was 30-something