And Then There Is the Fear

And Then There Is the Fear 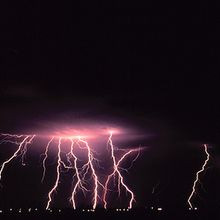 Scrolling through the Facebook statuses of friends, I chuckled to myself. I sat with my back facing the TV on the computer, while Marc sat crossed legged in the middle of the floor watching his favorite cartoons. I turned around to tell him about one of the posts a friend had made; something I knew would get an automatic response out of him. He turned slowly from the TV and stared at me blankly and then turned back to the TV.

“Marc, did you hear me? You don’t have anything to say?” I questioned, thinking only that he was ignoring me.

He turned back and looked at me, blank and expressionless then turned away, again.

I moved over to him, sat down in front of him and grabbed his face and turned it toward me. I told him, “Speak to me. Use your words. Can you speak?”

Robotically, he answered, “I. Can. Speak.”

Too much pausing between each word made me understand right then and there that something was wrong. I jumped up and started getting dressed, talking to him the whole time, all the while asking him silly things just to see if he would respond. Mechanically, he kept turning to look at me at the sound of his name and then turning away.

Fear pumped through my heart as it began to beat a million times a second. I had been asking him all week if he felt okay. He just didn’t look good. Nothing visible just dark circle around his eyes as if he hadn’t been sleeping though I know he had been getting plenty of rest. Responding slower on occasions but I believed it was because he was preoccupied with video games or television which he’d been consumed with a lot of both lately. Nothing new.

It was like I could sense something was wrong. I was having bad dreams lately about things that made no sense. I felt a need to have him close, within arm’s reach and always within eye view. I had become overly protective by instinct but I thought I was overreacting so I tried hard not to stress him with my thoughts. I knew we had a doctor appointment coming up this Friday, so I just held on to those concerns to bring up to the doctor. No need to frighten Marc if my fears were not true.

This was unusual. Was he having a stroke? An aneurysm? It was completely out of the norm. But I am always told I am good in an emergency and somehow panic mode set in but organized chaos Casandra took over. I started gathering things and stuffing them in my purse, gathering his meds, finding him clothes and putting them on him and all the while talking to him. But he would not talk back. He even stopped responding when I called his name. He just stared now.

I picked up the phone and dialed 911. Calmly, I told them, “I need medical assistance immediately. Something is wrong with my husband. I think he’s having a seizure.” They were on their way.

I knocked on my roommate’s door. I told him. “Marc is about to have a seizure, please get dressed because the paramedics are on their way. We’ll need to meet them at the hospital.”

As soon as my roommate stepped out of the door of his room and I walked back into mine, Marc raised his hands to the side of his head like he wanted to grab it and began screaming as if he was in pain and then the convulsions started.

This happened the first time I ever saw him have a seizure. Only he’d been sleep. I heard him yell, I thought he was having a dream but then he started convulsing. It was horrific never having the experience before and to have been catapulted out of a deep sleep by it. And people wonder why I have horrible insomnia. His seizures tend to happen at night. I spend most nights up doing nothing other than watching him sleep, listening to make sure he’s breathing and preparing myself for his screaming.

I yelled to my roommate to come help. We turned him on his side and I had him hold Marc there so I could get the paramedics inside. They came right as he was finishing his seizure.

He had three seizures on his way to the hospital, they told me. He had one upon arriving in triage.

But I don’t know what’s worse. Seeing the fear on his face and hearing his screams to watch them turn into these convulsions or when I walked in to find four IVs in his arm, a ventilator shoved down his throat, his hands strapped to the side of the bed and watching him lay there while this machine did all his breathing for him. Then to subsequently watch him have a reaction to some medication they gave him and watching him vomiting excessively while he had these tubes in his throat, watching several nurses hovering over his body trying to hold him down while they pumped out the mess and watching him fight against the restraints not understanding or knowing where he was and why he was there. Maybe the worse was watching his labored breathing, obviously a struggle for him even with the help of the machines.

Then there is the fear. The fear that goes along with sitting in a waiting room for hours without being able to be near him or hold his hand or know what they were doing and saying around him. The fear that I was not doing enough to help him or protect him or to save him.

There is a deeper fear that arises when the nurse comes out and asks you, “What would you like us to do in the event that he becomes unresponsive?”

Then there is having to tell people the play by plays, make sure I don’t leave anyone out of the loop. Having to hear people tell me continuously to be strong when being strong isn’t an option because it’s mandatory, it’s ingrained in my DNA. It’s what I do. Day in and day out, it is all I do. When what I really want is to have someone sit next to me, hold my hand and tell me, “It is alright for you to cry. Scream if you have to. Breakdown and be angry. Admit that you feel weak and you feel scared and let me be your strength.”

But even having my roommate here doesn’t make that an option because he is incapable of dealing with anything outside of himself. I can’t blame him, he was born that way. He hasn’t learned any better. I can’t blame anyone really. It is my reality and will always be my reality.

But just because I can’t have this doesn’t mean I am not grateful for the prayers and the assistance that came from all over the globe just to buy me a cup of coffee to get through my day.

And I know that when Marc wakes up and we walk out of this godforsaken hospital that my job isn’t over. I don’t even get to breakdown then. I have to hold it all inside, for him. Because it isn’t fair to him that he is the one to physically suffer through all this and then turn around and have to pick up my emotional pieces that lay shattered all around me.

This is what you do when you love someone. You give everything you have and more and know if and when the tables are reversed and they are capable of doing the same for you, they will.

Thank you ladies... And <a href='http://www.m40.siteground.biz/~caregiv6/members/ejourneys/' rel=\"nofollow\">@ejourneys</a> thank you as well. I appreciate it :) I am doing much better now that I've had time to relax a bit and I can see that he's getting better every day. Plus his doctors have reassured me that he is perfectly fine for now. Just an abnormal scare and they are working on giving us more options and to see if there is anything more aggressive they can try before resorting to a surgery. So that is a weight lifted as well.

(((Big Hugs))) It's okay to cry (and to scream).\r\nLike Pegi and Debbie, I want to take you to that stairwell where you can let it all out. Showing emotions is okay especially when so much else is not okay, and even after things move closer toward okay I wish for you and Marc a place of healing and safety.

I just want to know when showing emotions became a bad thing? I am afraid. Even though my husband is finally up and talking and breathing on his own. I still have fear. I still feel like crying when I look at him. I have a lot of emotions. I guess I just have to find a way to get them out but what happened to being able to have a good old fashioned cry and having someone tell you it's okay to do so?