It's been more than a year since I came in. I'm not very good at "social club", specially when I don't personally know the people I'm talking to. I felt a bit out of place. So I didn't come in any longer, even though I followed Caregiving.com on Facebook, on Twitter and on Linked In. I frequently read what you had to say, specially what Denise had to say.

I'm back today, even if it's only for today. My Dad passed away last Sunday. I'm still having difficulty believing it. I've been with Dad, Mum and my kids 24 / 7 for almost two years now. Before that, for another four years, the only time I was at home was during the night.

At this final stage, Dad was longer able to talk, almost couldn't feed him, he choked drinking water, his intestines stopped working. He started running a fever had a bad urine infection, was bleeding from his intestines. I didn't know what else to do. I took Dad to hospital last Friday: I felt I had to let him go. I couldn't see him suffer any longer. I told the family: "Get ready! Daddy isn't coming home again." I stayed with him, came home just to bathe and sleep, see how Mum and the kids were doing. Saturday, I said "Sleep tight, Daddy!" around 12 a.m., and I didn't get to see him alive again. His weak heart gave in. My dad's gone!

He was cremated yesterday. It was what he wanted. It was a beautiful, warming ceremony. I kissed Dad so many times. I asked for his forgiveness for any wrong doing, but it hurts so much.

All day long, the most present memory was the one of my dad teaching me how to ride my bike. I don’t know why that was so present!? At four years of age my parents gave me a bicycle with those small wheels at the back. I felt so grown up beside my tiny bike, so happy. Every Sunday, Dad would go out with me, early morning, to teach me to ride the bike up and down our road, in London.

And one day my dad took the small wheels at the back away. He’d hold the seat, to keep the bike straight – so that I wouldn’t fall. And there he’d be, running behind me, me always shouting, “Daddy, don’t let go!” One day, I looked back because he’d been silent for a while: I saw Dad, what seemed really so far away, his arms in the air, a big, proud smile, shouting, “Look forward, Anita!”

“Look forward, Anita!” I wish I could hear him say that right now. Dad’s gone! I’ll never see him again! But one day I will look forward so that he, wherever he may be, will never be unhappy on my account...

I miss Dad so much! He was like my baby. I really don't know what to do right now. Just trying to care for Mum's broken heart, and my kids who are so, so sad.

Dad will be 81 tomorrow. We're taking his ashes to our family tomb. 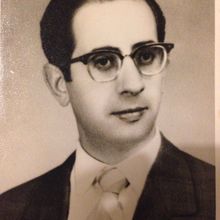 Dad, at 19 years of age. He was so handsome! I love this picture. Rest in peace, my darling!

Angelo, like you I'm not on here very often but I happened to catch your post about your Dad and wanted to say it touched me. Oh, and sometimes \"screaming\" is a very appropriate response. Also loved the poem in your comments_mysql.

Yesterday was better than today! There's such an enormous nostalgia at hand these last hours... The kids are on Dad weekend. Me and Mum, we're alone. The house is even more quiet... empty. \r\n\r\nI took Mum for a small walk in the afternoon. It was terrible. Every other minute someone walked up to us to offer their condolences. At a certain point I just wanted to scream... Mum couldn't take another step...\r\n\r\n\"To miss is to love a past that is not yet passed,\r\nit is to refuse the present that hurts,\r\nit is not to see a future that invites us...\"\r\n\r\nPablo Neruda

Thank you, Denise! It's time to mourn, now. Try to get Mum back on her feet, as also the kids, and myself. We're all a bit lost at the moment. There's a big empty place in this house, and unseen wounds - though very much felt.\r\n\r\nThank you!

Oh, Ana, I am so sorry! I can only imagine your heartache.\r\n\r\nI just love the story about your bike and your dad. He sends this story to you to remind you to look forward. You carry him in your heart as you look forward. \r\n\r\nI'm so glad you let us know. I'm thinking of you and yours and wishing you comforting memories.