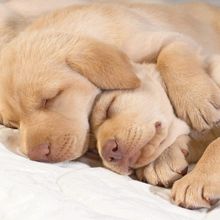 Within a few months of my mom's passing away, my cat, bunny and dog also crossed over the rainbow bridge. I remember thinking how cruel the universe was, taking them all so close together. In reality, all of my pets were around the same age: Jewels, my shepherd, was 14, Dutchess, my kitty, was 13, and Titan, the bunny, was 11. In hindsight their passing so close to each other makes sense but at the time I didn't see it that way.

I decided to rescue another Shepherd pup about a week later. She was a 10-week old beauty I named Hope. I picked that particular name as I had wanted her to help fill my home with laughter and warmth again. Three of our four kids still lived at home then and the house seemed so sad all of the time. Hope brought into the home so much love but I felt we needed more. So, a week later I rescued another Shepherd pup and named her Storm. These two brought laughter back. The house filled with everyone looking like we all had a purpose once again. The kids and their friends started spending more time here, we all gathered for dinner at the table once again. It certainly wasn't easy but these two new souls helped each one of us survive a time when it felt so hard to do.

That was in 2011. My family has since lost my father, my brother, and my mother-in-law. And I did what I do best -- I rescued a kitten, a bunny and two more pups.

The holiday season is upon us all once again. For me, I tend to stay home, inside. Rarely do I go outside. I'm not sure why but I prefer not to socialize much -- which seems weird seeing as the holidays are when people socialize the most.  Today, I looked down at my youngest rescue and noticed he's put on some weight. I just realized that I stopped walking him. We have a huge pen where they all run and play and what but this wee fella and I took daily walks around the property (we own five acres) and I haven't taken him for one since the beginning of the month. So, this morning I've put on my boots, gloves, winter coat and headed out with the pup to experience snow for the first time. He's a rescue from Texas so this will be an adventure for him I have no doubt.

And for me as well.  In my heart, I know that even though I say I rescued them, the reality is they've all rescued me.

It's 3am here in my world. I am a widower. It's a simple fact and part of my life. I am coping well, differently than you, but your message registers and the concept that we all grieve differently comes through. I don't know where love comes from, but it's a great gift when it happens.

Ah Deborah that's awesome, and exactly how I feel about all of mine. I feel so blessed to be able to see the beauty in the creatures God sends our way.

Ah... thank you for rescuing those pups, the kitten, and the rabbit! We have two rescue bunnies and one rescue pup right now, but have fostered more. It is amazing how healing animals can be!

I love this post, Kathy. (I love all of them, actually.)\r\n\r\nWe need reminders of love and life during caregiving. I'm so glad you have yours, which also help you get out to enjoy even more reminders. :)