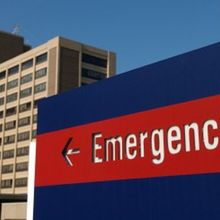 What a crazy week it has been! It is only by God’s sufficient grace that we have survived!

For the past several weeks I have been talking with the urologist’s staff, trying to figure out how to go about getting Mom’s kidney stent removed. They wanted us to drive all the way to town (1 1/2 hrs away) just to have him look at the chart and say come back in a few days to surgically remove it. That is just something Mom can’t do anymore. It causes too much agony. Finally the nurse told me to just take her to the hospital when the doctor is on call, have the hospital call the doctor and he will come and remove it.

It made sense to us, so on Wednesday, Feb. 18th, I drove her to the hospital in town. Once there, the ER doctor called her urologist and, of course, he wasn't on call! His partner refused to come down and was angry that we tried to “work around” the doctor. The ER doctor told us to go home and set up the appointment as the doctor wanted us to. We were crushed. Mom was in SUCH agony (the stent is extremely painful). I knew we couldn’t just go home.

We got a hotel for the night and first thing the next morning I called the doctor's office and they said they would get us in the following Tuesday. I was so frustrated! I ended up calling the VA hospital to see if I could beg another doctor to just remove the stent to ease Mom’s pain. They were very gracious and said they would remove it Friday at 8a.m.

I booked another night at the hotel and we tried to rest. I got her to the hospital in the morning, and as I was transferring her to her wheelchair, I think I had put the wheelchair a bit too close to the car, and I didn’t check to make sure her feet were firmly planted on the ground before we stood to transfer, and we ended up hitting her elbow hard on the corner of the car. She thought she had broken her elbow. With RSD, even a light smack or whack can feel like a broken bone, so we never know what damage is done (plus she is very fragile and breaks VERY easily). We went into the hospital for our appointment. We explained what happened to her arm and the urologist suggested we get her arm x-rayed before we dealt with the stent. They wheeled her down to the ER and we waited for X-ray. She was not looking good at all!

They took her in the gurney to the X-ray room. The nurse didn’t want me going with them but I insisted. He wasn’t happy but he didn’t have a choice in the matter as I followed behind. They had me wait in the next room. As I was waiting and praying, I all of the sudden heard the man yelling “Ma’am, Ma’am” over and over again with increasing volume. Then I heard him scream code blue. It then came over the loud speaker. They also said they needed a crash cart. About 20 doctors and nurses and three crash carts descended on her room. Two armed guards stood in front of me as well as 2 nurses and other hospital staff - maybe they thought I would rush in and interfere? I don’t know. I just continued to pray. The Lord kept me calm. It took about 10 minutes or so (time stands still during moments like that) and then I heard her moaning. I knew she was going to be okay by God’s grace.

They finally wheeled her out and back into the ER room. I thanked everyone and followed. As we were waiting back in the ER she lost consciousness twice and the nurses rushed in to do sternum rubs to wake her up (the bruises are impressive). We got blood work back and found out that all of her electrolytes were WAY below normal (almost off the charts). They think with all of the pain and agony, along with such low electrolytes, that is what caused her heart and breathing to stop. They believe the electrolyte imbalance came from an antibiotic she was on for a toe infection--it caused C. diff, a bacterial infection of the gut that causes severe diarrhea and if it goes untreated, it can cause death They thankfully admitted her into the hospital and started her on fluids and meds.

That first night she received 15 various bags of fluids (four bags at a time through two IVs) and meds. They also took 19 vials of blood. The poor thing was a pin cushion! The nurses and staff were wonderful. I am not sure any had dealt with RSD before so it was educational for them even though hard for us. Teaching about RSD is excruciatingly painful for Mom as people are so grabby and loud. I was up every 30 minutes, every time someone walked into her room, asking them to whisper, not flip on all the lights, and not to touch her.

We stayed there until Tuesday when she was finally stable enough for surgery. Tuesday morning they wheeled her down for surgery. Literally the “surgery” takes less than five minutes (and is usually out patient and doesn't require anesthesia, but with RSD she can't be touched so it needs to be under general anesthesia). She was tremoring SO badly they had to put her under deep anesthesia in order for her muscles to calm down enough so they could remove the stent. It took her almost two hours to recover enough to come back to her room.

As soon as she got back to her room, she mentioned that she was hungry - I was SO pleased because she hasn't had an appetite (she has felt like she was having labor pains every moment of every day since Jan 9th). She said the “labor pains" were GONE! We were almost in tears! The doctor came down and said they were releasing her as she had done so well and they felt (and I agreed) that she would heal better and her pain could be controlled better at home by me.

Thankfully our darling nurse took her sweet time getting paperwork together so Mom could rest up a bit before I took her to the hotel. We were released around 1 p.m. but it took until after 5 p.m. for the paperwork to be complete and for us to leave. I drove her to the hotel for her to rest.

My brother flew in the next morning at about 1 a.m. We are SO thrilled to have him here to help! The Lord knows I really need him right now. We finally arrived home late Wednesday evening and Mom has been resting. My brother was here until Saturday morning. What a blessing he is! I was actually able to get out of the house and have some "me” time on Friday! I was finally able to go and complete my birthday present that I started back in October (I went to a ceramics store and made a pottery bowl - I was finally able to paint it!) He is helping me knock out my LONG to-do list as well as helping me care for Mom. We are meditating on "My grace is sufficient for thee, for my strength is made perfect in weakness” 2 Corinthians 12:9.

Thank you for the continued prayers--we continue to need them! We had stopped the detox but will restart on Monday. We should complete it mid April barring any additional complications. Hopefully we won't have any more "excitement" for a while!  We are all funned out!

Your tireless care for your mother is amazing. By any standard you two are the Dynamic Duo in my book. Despite such difficult obstacles you persisted until she got the care she needed, and hope she continues to experience less and less pain, and more and more healing. Glad to hear your brother will help you also, a burden lighter by far.

So sorry for your poor mom! Thankfully she has you as her advocate!

Ohhhh, LH! I'm so sorry for all these terrifying moments!\r\n\r\nBut, I am so glad your brother was able to visit! Even better--that's awesome you put him to work to you could take a break. I hope breaks like that will become more of a routine for you. \r\n\r\nAnd, absolutely--the \"fun\" must end. :)