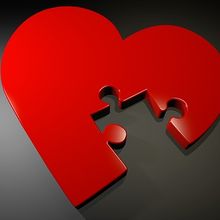 Just when it seemed like Mom was beginning to settle in to her new home in assisted living, it seems like another change is on the horizon. About a week ago, I noticed she was no longer crying every time we talk and telling me how lonely she is. Even more importantly, she started talking about a boyfriend! One of the male residents has taken to her and started visiting, sitting together and holding hands. She told me he kissed her and it made her happy! I was thrilled beyond words to see a new relationship bringing even the tiniest bit of brightness into her life. (And I met him and also learned from the staff members that all she said was true.)

BUT. She has started sun-downing pretty badly. They called me tonight to say they couldn't redirect her from the door. She was adamant that she was going to get in her car and drive home, because she had been working all day and it was time to go home! Their attempts at getting her to go to dinner or do anything else just made her angry. I talked with her on the phone for about half an hour, reminiscing about the job she used to have, and then going through her biography, talking about happy times and people we both love. She was more calm by the end and agreed to go eat dinner. Apparently this kind of thing is happening regularly. The powers that be believe it's time for her to move into the memory care unit.

A room has become available, and I know they can't hold it forever. I can't bear the thought of moving her away from her new sense of familiarity (when she's not sundowning) and new relationship. The first transfer was so traumatic and she really went downhill cognitively. I'm afraid to see it happen again. At the same time, I understand that they're not quite set up to meet the needs of someone with her level of dementia and that she might (they say) do better with more structured days. But she'll have to leave her nice apartment with her comfortable furniture and space for visitors and move into a standard single room. She'll be in a place with people who are more demented than she is.

My heart breaks for her and for me, too. I was proud of being her caregiver, even though it was stressful at times. But I felt like I was being a good daughter to her and giving back some of the love and care she had always lavished on me. But now I just feel guilty and sorry. And I miss her.