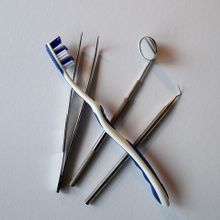 Last night a tooth broke. Mine, not Mom's, she's had false teeth since she was in her late 30s. Broke clean off at the gumline, there's nothing of the tooth left above the line. It had had a crown on it, whole thing came off. Saturday night. When you can't get to a dentist until Monday.

Here's the problem though. On August 3rd I had a crown put on another tooth that had broken two weeks before. Because my dental insurance was new, I have a ONE YEAR waiting period before it will cover ANYTHING other than a cleaning. So nothing on that first tooth was covered. It took every single $ in my HSA (which is a holdover from a previous employer 'cuz we don't have one through where I work now) PLUS maxing out what was left on the Care Credit card PLUS a chunk of my checking account -- over $900. And that was to put a partial crown on a half-broken tooth.

This tooth is gone. This will have to have the roots surgically dug out. It's in the middle of the side. I can't chew without it. So we're no doubt looking at an implant. A multi-thousand dollar project. At a dentist. That doesn't take payments. None of them in town do. Not covered by regular medical insurance. There's no charity dental clinic, no dental school. I'm also dental-phobic.

I don't have the money for this. I don't have anyone to turn to. I was unemployed for several months last year and under-employed for the rest of the year. My savings are gone.

I want my mommy. But she's not really here any more.

UPDATE (sort of) - did get in to see the dentist at 8:30 this morning. Because the office manager went into a meeting I am still waiting to here about the costs of the various (okay two) options as they told me that she would give me a call - leave a hole or get an implant. Because of the position and the condition of the adjacent teeth (both have crowns and not much left under those) not able to get a bridge or a partial plus a flipper won't work either. So I was right thousands of $ for an implant.

Oh Cat..Denise summed it up well. I am so sorry. Dental phobia should be a recognized medical condition. And insurance should....not be so dang complicated and restrictive. Wishing you a productive dental visit today and so grateful that Denise has established options for assistance. Hang in there.

I ditto Denise, \"This just sucks Cat!\".\r\nI ditto you Cat, \"I ’m also dental-phobic.\"\r\nPlease consider the CareGifters program Denise suggested to help with the costs....feel the message it carries with it to help satisfy some of the \"I want my Mommy\" thoughts, along with you arent in this alone...we all care about your well being.

This just sucks, Cat! I think the stress of caregiving can wreck havoc on our teeth.\r\n\r\nWe have a CareGifters program which sends $500 to a family caregiver in need. I know it won't cover what you need, but I hope it would help. If you're interested, fill out the application here: https://www.caregiving.com/caregifters-application/. Once I receive, I'll be in touch about logistics.