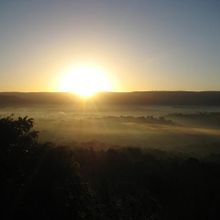 My late grandmother got sick in 2003. My mother and grandfather lived with her and so were her main caregivers. I also helped with her to take some of the load off them. For a while I worked until she kept having recurrent health problems and had to go in the hospital one time after another. At Christmas 2003 she had to be transferred to a hospital an hour away. I needed to be more available to stay with her so I called my supervisor and told her I needed to take some time off to be with my family.

We decided to try and get personal care. She didn't want strangers coming in so it was decided I would take the PCA classes and be her aide. I needed a job and she needed the help. So I became her aide, even though I felt sleazy at the time for being paid for taking care of my grandmother. But it worked out.

A few years later I decided to go back to school and finish my social work degree. She always wanted me to finish; in fact she was still ticked off nearly 10 years after I quit college just a few credits shy of getting my degree. But that meant I would quit being her PCA. She wasn't happy about that but agreed to a new aide.

While in school part time I went back to work. But my husband got sick.

o I quit--work, not school.

I finished my degree and in the meantime other family members started having health problems. I got a part-time job that was quickly turning into a full-time job and also the long drive started to get to me.

I like the way I really stick to things.

I've been looking for part-time jobs closer to home but have had no luck. The area I live in has been economically depressed before the economy ever went in the crapper.

But... I'm also torn. I need to work, I like to work. But I feel guilty for wanting to work and lazy for not working. We need the money.

But to me family is more important than a job and we've cut back on a lot of things. And guess what? We don't miss them.

It works out. It always does.

(I'm submitting this post to Caring Across Generations' #Blog4Care blog carnival. Go here to check it out.)

You're welcome and thank you for the kind words.

Hi Lisa--This is a terrific post for the blog carnival. It speaks perfectly to conundrum--how can you be available to your family when they need you and hold down a job? It's just tough.\r\n\r\nI love how your understand your priority--family--which allows you to make the right decisions. Your priority leads you.

I can relate to this also because I was let go from my last job because of time I had to take off to take care of mom and I was all she had.

Hi Lisa,\r\n\r\nI really related to your post. I have been in very similar situations. Employers do not understand. I was laid off twice for missing too much work because I had to care for my mom.\r\n\r\nI am laid off once again now. Things are a bit tight around here but I know my mother is being taken care of properly and she would rather be with family. Thanks for posting.\r\n\r\nAngie