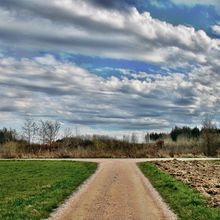 Dad says he doesn't want to go to any specialists. No cardiologists. No therapists. Preferably no doctors at all. He said this to his doctor the other day. His doctor responded by saying okay. He still needs to see her now and then, but that's all. They'll respect his wishes. She's not going to pester him to walk more. She's not going to urge him to go to the dining hall and eat more. He's lost several hearing aids and we've decided it isn't worth it to get another one. The therapist gave him a simpler device which amplifies the sound. It works well - when he uses it. He sleeps most of the time. He can barely shuffle around the apartment. He lives with constant pain.

On the phone the other night, Mom told my sister she was waiting for a call. She knew Bob was trying to call her from Sterling. Her brother, Bob, died more than twenty years ago. Then she said, no, maybe it was Jack. Her other brother, Jack, died about the same time as Bob. Then she caught herself. "They're all gone now," she said. "Don't tell Terri I got confused." I took her to see the doctor because her arm was swollen and painful to move. No, she couldn't remember what she did. "It was just there," she insisted. The x-ray showed an old (1 month+) hairline fracture of her elbow. Mom also told me that Fatima, the lovely woman who does the laundry, had noticed she needed new underwear. "She brought me some men's underwear. I don't know why she did that, but I have to say, they are comfortable." Feeling a wee bit confused myself at that point, I investigated and found the new underwear is adult pull-ups.

The Assisted Living Facility is going through renovations. Sometime during the next six months, they will be moving all the residents out of their current apartments and into some unused apartments while the work is in progress. The entire wing they presently inhabit is going to be demolished. Rumors fly from room to room like hummingbirds, stopping in mid-air to pass on bits of misinformation: Go up to the second floor and you can see your new rooms! They're going to be bigger than these. You'll be just around the corner from me. They're not telling us anything. The new rooms will be smaller. Some people will get to choose their rooms.

Our mortgage payment just went up by over $200/month. Housing values have gone up astronomically here and that means higher property taxes and higher insurance rates. Our car insurance went up a lot as well. After 27 years in this house, refinancing from time to time to pay for college, medical expenses, therapies, and such, we suddenly find we are being priced out of our home. While we can squeeze by in the short term, long term is requiring some serious thought and planning. To make a long story shorter, we're thinking of leaving Colorado for a more affordable state. It's a heart wrenching decision. I have so many connections here. My husband is all for the move. Surprisingly, my siblings are all supportive, too. The older of my two brothers even said they'd be willing to move Mom and Dad down to Texas so they could take over and be close to them.

Guilt drifts in and out, the smoky remains of the hellfires of my early Catholic years. I'm abandoning my parents. I'm giving up. I'm failing. My sister came to visit and surprised my parents. Dad hugged her and held her hand. Mom calls my sister the "fat one". It's okay, my sister said. She's heard it so many times, she's come to expect it. I remember when she moved to California and called to apologize to me because she was leaving me to be the only one to cope with mom. I told her to go. She needed to go. Now I want to run away, far away from my caregiving duties. Far away from 1000 sq ft houses that sell for $400,000. We are looking at places in Massachusetts and Maine.

We're all at crossroads right now.

Thank you to everyone for your responses. I'm trying to process a lot right now so I'm not on this site very often. The assisted living facility where my parents live are saying that every resident needs a family member within driving distance to respond to emergencies. So.. I'm the only one still in Colorado. And I am feeling stuck right now. We want to move and it may be that my family will have to move out there at first without me. My brother offered to move them to Houston, but Dad may be just too frail to make the move.

Goldie, I love the way you write and I love you sharing the interaction of your family. The account of the people in assisted living gossiping about their changes was exquisite. We have decided not to force anything on my husband either. I believe it is the kinder way. Your account of being priced out of your home and making many changes was poignant but somehow you seem to have hope. I think that may come from the support of your family and from your own sense of taking life as it comes. Bravo and I am waiting to read more of your journey.

Good luck with your new adventures Goldie. You have paid your dues and now it’s time for you to take care of yourself. How exciting to move to a new state and start a new life. New Hampshire may be worth looking into as well. It’s close to Massachussets and Maine without the state income taxes.

Thanks for taking the time to share this, with all of the choices and other important matters that are in your life. You're supported here and understood. The caregiving story arc is just so very long.........