jan
This is a Public Service Announcement for anyone who drives or eventually inherits an automobile from a caree. Good Luck With That.

I drove my mother's car since 2013 when I became her full-time caregiver in Florida. She has insurance with Allstate, with a 6-month renewal until Feb. 2016. She passed away in August. I continue to drive the car while I've been attending to her affairs, and also for personal reasons. Immediately after she passed, we met with our lawyer to have my sister appointed the executor of the will. He indicated my sister needed to first be appointed the executor, and then she could sign the title of the car over to me. It has been over two months and we are still waiting for the courts to finalize my sister as executor.

I found a State Farm agent and took out a policy in my name on the car. While I was speaking with her, I asked if I was covered at the time and she said everything was fine since I was covered on my auto policy from my home in Ohio.

I returned to the DMV and the same agent, who now indicated that no, I did not have previous coverage, had not had coverage since my mother's death, did not have permission to drive her car since a dead person can not give permission, and the only person who should have been driving the car since my mother's death was my sister, the executor, and then only for purposes of repairs or driving to the DMV. He downloaded these rules on his computer and handed them to me.

I had to sit down to avoid having a small stroke, to think I was driving for over two months with no insurance. In South Florida. It felt like when you are doing home repairs and uncover a mess of brown, burnt hot electrical wires which could have burned your house down at any second but hadn't done it yet. I told the clerk, "the insurance agent had said I was covered" and he said, "insurance agents don't know what they're talking about."

The downloaded rules also indicated that if a car is going to be sold, it should be sold quickly. My question is, how can it be sold quickly if it takes two months to simply be appointed executor, so you have the right to sell the car in the first place?

I was able to get renewed tags on the car. Back at home I called the Allstate agent to cancel my mother's policy. This agent indicated that I cannot insure what I don't own, so I had no right to take out insurance on the car in my name. He said her current policy was still in effect, I should cancel the State Farm policy in my name, I was covered with my insurance from Ohio, I needed to be a listed driver on my mother's current policy, and not to trust the DMV civil servant who "didn't know anything anyway." My Ohio insurance agent said I should cancel the Allstate insurance and have my mother's estate listed as an additional insured on the State Farm Insurance.

So right now I have three auto insurance policies covering me. Why do I still want to cower in my garage? Does anybody really know what time it is?

When I have an answer for this, I will add it to the list of Your Must Knows. 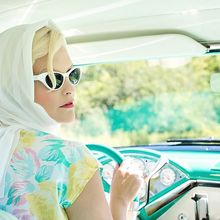