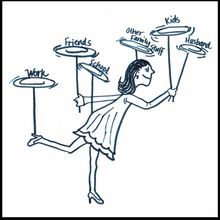 Sometimes life reminds me of the circus act where the person is trying not only to balance plates on skinny little sticks (which is a feat in itself) but also spin them. Each one of those plates has a certain aspect of your life that you're trying to handle and you're frantically trying to keep those plates spinning. I was thinking that I only have three plates: Gramma, Work, Personal; then I got to thinking about what each of those entails and some of those aren't just the one plate that I thought they were. Sometimes those skinny little sticks branch off and what I thought was one plate the size of a dinner platter is actually quite a few saucers

Gramma: I can honestly say that I think I have this one going the most. It seems to be the only one that doesn't wobble. I'm getting into a system that helps with keeping her meds straight and up to date, and what is really great is the pharmacy helps me out with that as well. Whenever they start getting close we get a knock on the front door and they've already filled them and sent them over. Her doctor appointments tick over every month and we have no issues making them thanks to the FMLA at work which leads me to the next spinning plate...

Work: Back in September of 2016 Gramma started having some health issues dealing with being dizzy etc which caused me to miss a LOT of work. The Team Lead I had at the time mentioned helping me get FMLA to cover those days but she was like "tits on a boar pig" as my great-grandfather would say. And it never happened by the time I was transferred to a better TL and I explained the situation to her and I learned that it was all in my lap it was too late. That time has been haunting me ever since. I only call in if I'm sick and so as soon as those days fall off I have them right back on there again and that's causing this plate to wobble a little bit. It's not too bad I'm not at risk of losing my job or anything but it's a red mark on an otherwise fairly good report card.

Personal: With keeping the first two going this one seems to be suffering the most. It's the branched out into little saucers that the only thing that seems to be keeping them on their little sticks is that little lip on the bottom of them. They're made up of friends, health (which is split into things like exercise, dentist, eye exam), reading, writing, and just zoning...then sleep. Uh gods, sleep. Writing likes to bump into sleep and then they go careening dangerously close to falling. And writing overlaps with friends as well because of my writing partners who are now waiting for me to get my act together but my brain has been so dead it's like a wasteland. I need to recharge but I don't have time to recharge because of those other two plates that I'm struggling to keep going because they're more important. Right?

So if you're wondering where I am, now you know. I'm frantically jumping from those first two sticks and trying to reach the third and once in a while I make it but not for very long at a time. Please just bear with me.

Reminds me so much of myself. It is hard to jump from plate to plate and keep all things in order. Get some you time when you can. Hugs

Thanks for the update Marie.....good to hear from you! Keep \"jumping from those first two sticks\" and grabbing personal time as you can.