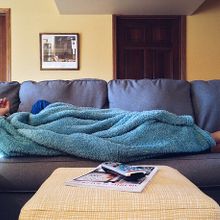 Sometimes it's the battle with family members.

Sometimes it's the battle with the health care system.

And, sometimes, it's the toughest battle: The one with the couch.

The couch calls when life feels too awful, too hard, too unforgiving, too exhausting.

You want to crawl to the couch, plop under the blankets and stay there.

I'll just lay on the couch for the afternoon, you think. Because the couch feels so safe. It seems to protect you from life's hurtful touch.

You fall sleep that night with thoughts of the couch. I'll just go there for a little bit tomorrow, you think.

And, so it begins. You're in the clutch of the couch.

Who can blame you? The decisions on the couch can be made with the click of the remote control. The movements on the couch involve a turn from side to side. On the couch, life is easy.

Except the couch is not your life. The couch is a short-term respite. It's not life.

You've battled so much to get this far. Keep going.