Be Careful What You Ask For...

Be Careful What You Ask For... 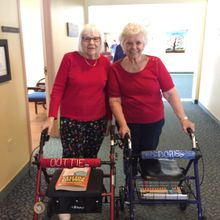 When I was pregnant for my son I really was hoping to have twins. After all twins do run in the family. My mother’s sisters are twins. Well, giving birth to twins didn’t become part of my destiny, but taking care of twins certainly did.

My mother and her twin sisters (Doris and Dorothy) had always been very close. They would go shopping together on the weekends and have morning coffee at Dunkin Donuts on weekdays. When Dorothy started becoming a bit “forgetful,” Doris began staying at her house. It seemed like a normal arrangement from my point of view.

About 5 years ago, I stopped by my parents home for a visit on Labor Day weekend and the twins were there too. They were distraught over a lost set of car keys to Doris’ car and asking for help. They had searched and looked everywhere but the keys were nowhere to be found. I told them that we could contact the car dealer and have a new key made. Since the car was all locked up, I assumed the registration, which would be necessary for the duplicate key, was inside the car. I went online to the DMV website to order a duplicate copy of the registration so we would have it to get the key made. The website stated there was an error with this account and to contact the office. Well, apparently this wasn’t going to be a simple as having DMV mail a duplicate copy.

The next day, I packed up the 80 year old twins along with my 82 year old mother and headed for the DMV. There’s no experience quite like sitting at DMV all afternoon with three senior citizens. They really had nothing else to do but sit at the DMV all day. However, they didn’t see it that way. They saw it as a big inconvenience and it was my fault for bringing them there in the first place. They had much more important things to do. You know like go shopping or go out to eat. Anyway, to their perception it was me who was inconveniencing them because I had not brought them shopping like they wanted. Also, they have a tendency to talk about other people REALLY loudly and they have no idea that the person can probably hear them. OMG! I was so embarrassed because I had no idea what they were going to say next. They had taken on the role of fashion police and they had a comment about EVERYBODY who walked by. “Look at that hair!” “Does she own a mirror?” “He wouldn’t stand out in a crowd of two!” After trying to keep their running dialogue about everybody else quiet and answering the question of “why are we here?”...every 10 minutes for the duration of the afternoon, we did finally get our turn at the window. Well, the reason we couldn’t just order a duplicate registration online is because Doris’ drivers license had been suspended (like a pretty long time ago too!). Why you ask? Well apparently she hadn’t made her automobile insurance payment.

So..guess what? That meant we sat there all afternoon only to find out that we needed to make a trip to her insurance agent. This was my first experience of being around them for that long of a timespan. Needless to say, I was exhausted after that experience. They too were exhausted because this trip to the DMV was not part of their normal routine. However, the trip to the insurance agent awaited. This adventure was only beginning.

The next day I joined their senior citizen coffee club at Dunkin Donuts after which we went to the insurance agent office. Doris wrote a check to reinstate the insurance. Upon further questioning at the agency, we found out she hadn’t paid it in over a year. Holy cow! Of course she immediately denied it and argued with the person at the agency. This essentially meant that she’d been driving on a suspended license without insurance for over a year? I became a little suspicious about her ability to care for herself. However, the social skills were still so strong that it was easy to believe that it may have just been a simple oversight on Doris’ part. I did know for sure she must have had a guardian angel taking care of her because she hadn’t been involved in an accident or anything like that. After reinstating the insurance we went back to the DMV to reinstate the license. Another exhausting day but we got it done.

Well, it took two days to get the proper documentation, but it was finally time to go to the Cadillac dealer to get the key made. We were able to get a blank key but it would have to be programmed. After reviewing this with the person at the car dealer, I was thinking how glad I would be to get this issue resolved so I would be able to get back to managing my own life. I hadn’t yet realized that this was only the tip of the iceberg of issues that would need to be resolved.

Once opening the vehicle, I realized there were groceries in it. This was hot Florida in September. There was a frozen fajita kit all inclusive (meat and veggies) that had heated up so much in the bag in the backseat of the car that it had exploded all over the inside of the car. Talk about a fiesta! The heated up groceries had welcomed in a terrible smell and any bug that could crawl inside the car.

Wow! Now the car had to be cleaned. The backseat was loaded with food that had been just rotting back there. The trunk was full of random garbage and several bags from Goodwill of miscellaneous items such as glassware and dog beds. The ladies did not really appreciate my involvement in this situation. However, I wouldn’t expect the two elderly ladies to be able to clean up an overwhelming mess like this on their own. Therefore, I brought to car to be cleaned appropriately. From their perspective, however, they thought that I was trying to get the car away from them. After all, it was a Cadillac and who wouldn’t want a Cadillac...Even if it was all filled up with cockroaches, spoiled groceries, and bags full of Goodwill items. Ewwww!

Well, it was becoming clear that things weren’t quite right with them and they needed some help and guidance. I hadn’t realized yet that this would be the beginning of my caregiving journey. I did, however, at the time chuckle a little because I remembered how I had wished to have twins one day. Well...be careful what you ask for!