0
I'm happy to say that this week has been a real turnaround from last week, on so many levels.

1. Last Friday we had an hour-long conversation with a dear friend and former mentor of mine. It helped combat isolation all around, and I want to make those calls a regular practice.

2. In my last entry I wrote that I needed to put together a quick reference guide to hand to healthcare professionals, especially given the different views my partner and I have on some things (like whether or not she'd had "neurosurgery").

I haven't exactly done that yet, but my partner came up with the idea -- independently -- to assemble a similar list. Together we're hammering out not only her medical history but her family medical history as best we can. She likes to include every detail (e.g., she had breathed helium once during a party in or around 1979), so I've got our template arranged according to categories: diagnoses, major surgery, outpatient surgery, ER visits, non-ER accidents, and "other." I'll probably also divide "diagnoses" into official diagnoses and her own self-diagnoses -- e.g., she has diagnosed herself with ataxia telangiectasia, due to some red spots on her skin, and she thinks she might be Marfanoid.

We're sure to have some negotiating on the form. :-) But otherwise we're on the same page with putting this all together, the way we've been with her meds list (which also has a lot of details that have nothing to do with prescribed or OTC meds).

3. The natural foods store about a dozen miles from us has started a "healthy eating" support group that meets Monday evenings. Partner and I both went to the first meeting on July 1, where we met three other attendees along with the two facilitators. We already know the facilitators because they're on staff at the store.

Meetings will include not only talk but (weather permitting) walks on nearby trails and cooking. For me, fellowship is the bottom line, and I'm thrilled that my partner is also interested in these meetings. Bonus: I won a door prize of samples donated by the store's vendors. :-)

4. Partner and I have had some terrific talks. More and more, she is coming to grips with her MS. She still has her own ideas about the disease (e.g., saying that the doctors gave her CT scan X-ray brain surgery to deliberately give her MS; see "neurosurgery" above). But she is also facing some very hard truths and is slowly coming to terms with her limitations. Those limitations come smack up against a lot of childhood baggage.

I think our Wednesday support group (an all-purpose 12-step) has been instrumental here. Our monthly MS support group has also been instrumental, but the 12-step has more in the way of heart-to-heart talks and it meets much more often. I think the members' stories do for my partner what all your stories do for me; everyone's life challenges become our common ground. Each support group comes with its own forms of acceptance and validation. The bottom line is that I see my partner growing more comfortable in her own skin even in the midst of changes, unknowns, and fears. And because of that comfort, she is better able to be with others.

She also mentioned the other night that she needs to separate herself a bit more from me -- something I very much support. She had just read a passage to me from a book on emotional dependence and co-dependence, so that was the context. I'd like to think that my ability to detach when necessary has helped this process -- even if I'm not always successful at it, myself. :-)

5. Another great step forward is that my partner is communicating her needs much more freely. Part of that is because she's been learning to listen to her body. But I think her new self-acceptance plays a major role, along with experiencing the acceptance of others who are concerned for her well-being and who don't hold her limitations against her.

The meditation chime is an answer to one of her needs. If I need to speak with her, I need to catch her attention in a way that doesn't startle her. We've tried knocking on the wall at various distances, knocking on PVC pipe, and improvising a rattle. Even my stepping into her field of view can startle her, so she needs some kind of warning sound, sight unseen.

As we brainstormed I remembered the meditation chime I had bought years ago. We tried that, and it works beautifully. :-) 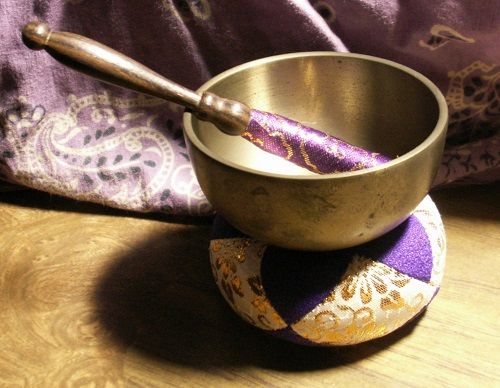 6. Partner doesn't need a colonoscopy this year as previously thought, but she will have a much less invasive endoscopy. We've been trying to get her history of anesthesia because she has been concerned about its effects ever since she read of anesthesia's relationship to actor Peter Falk's dementia.

According to the gastroenterologist we saw, the anesthesiologist uses a combination of Fentanyl, Propophol, Valium, and Demerol, though not necessarily all of them (usually two of the four). I'll pass that info on to the neurologist.

The gastroenterologist didn't seem too pleased with my line of questioning. I explained to him why I asked the questions I did. Even if the anesthesia is a non-issue (but who knows?), having that information reduces my partner's stress level, period.

7. After the gastro appointment, we had a late lunch at a local Cuban restaurant. Weather was between storms, which meant terrific cloudscapes. The storms had cooled temperatures to the mid-80s and we enjoyed some great food at an outdoor table. We also did some bird-watching, using the binoculars that live in my fanny pack. :-)

Our together time has been good :-) -- whether watching shows on the computer, reading in the same room (and sharing what we've read), cuddling, or standing by our open door, watching and listening to the deluge outside.

Truly -- and especially after last week -- these have been blessed days.

I am so happy hear about this very good season of life for you and your partner. I learn so much from you as you patiently work at communicating and comforting her. The socialization is so good for the both of you, Hurray!

I agree with Denise .. . though I don't have all the details. Thank you EJ for being there for me whilst dealing with your stuff! I love the pic of the meditation bowl! Calms me down! il

Oh, EJ, I am so glad. I really believe it's better because you fought for it to be better. You really made this happen--with your patience, your tenacity, your kindness, your boundaries.\r\n\r\nIt's better and you made that happen. That is just awesome. !!!\r\n\r\nYou've got such great solutions in place. Kudos to you and your partner. \r\n\r\nYou disrupt!!