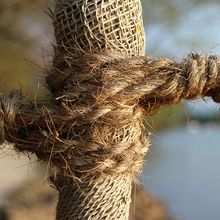 I think blaming a caregiver is the worst thing someone can do.

And of all people, that blame came from my husband. His cousin passed away last Saturday. He was diagnosed with pretty advance melanoma last year and a few months ago he started having seizures. They discovered at that time that he had almost 30 brain tumors as well. His girlfriend did her best to care for him and their young children throughout his illness. She has some brain damage from a car accident, so this was a challenge for her. Like all of us, she did the best she could.

Yesterday, my husband and I were talking, and he said that he thinks Jennifer (the girlfriend) should have done more to make Trevor (the cousin) go to the doctor sooner, or to make sure he was at every single one of his treatments. Honestly, he's lucky I didn't hit him, I was so angry.

How could someone who constantly ignores his wife's advice about his health throw any stones? And I told him exactly that. How would he feel if  his family blamed me for not doing more to keep him healthy? We have actually already had that and he was incredibly angry with his brother for it. But I explained that Trevor was a grown man, and Jennifer couldn't "make" him do anything he didn't want to do. We don't know how often she asked him to go to the doctor, she could have asked every day.

I asked Jordan (my husband) what more I should do since he wouldn't listen to me in regards to his health. He refuses to exercise, which I think would help is blood sugar, he eats poorly a lot of the time, he waits until his prescriptions run out to refill them and then has to go without for several days while we fight with the insurance company. I am constantly on him about doing things to make him better and he ignores me every time. Then he has the nerve to say that Jennifer should have done more?

He looked pretty humbled once I was done laying into him and told me I was right and he was sorry for blaming her. I think he really meant it. She was there taking care of him when no one else was. We live five hours away and with all of Jordan's issue, we couldn't visit much. Trevor's brother lives close, but he has been in denial about everything and hardly ever saw him.

Even though it was such an innocent and off hand comment, it hit me really hard. I'm still angry about it today. I think most of the reason is because (selfishly) I'm thinking about me. What are family members saying behind my back about how I failed Jordan? Have I done everything that I can to keep him healthy(ish)? I know that I feel like I could have done more. But then I think, how do I help someone who won't help themselves? I can't sit at home 24/7 and babysit my husband. I have to work and do everything else to keep our lives running. I don't have time to be my husband's mother. He isn't a little child and I shouldn't have to be even if I did.

Here is an example of what I'm talking about. A few weeks ago my husband ran out of one of his insulins. He waited until he was completely out before he called it in to refill it. First he had to wait for a new prescription, then the insurance company wouldn't cover it, so he had to go over a week without a medication he desperately needed. I told him he couldn't wait until he was completely out to call his meds in, he should do it with about a weeks supply left. He said okay, he would do better next time.

Last weekend, I got his phosphate blockers for him, and saw he only had about 10 left. He takes two, three times a day. I asked him about it and he said he had to ask the doctor about a refill. So once again, we wait for the doctor to write a new prescription, and the insurance refuses to cover it. We don't have an extra $200 to pay for it, so he is left with no meds until the issue is resolved. WHY WON'T HE LISTEN TO ME?!?!

I am seriously at the end of my rope dealing with all of this. Maybe this makes me a bad person, but I'm to the point where I don't really care what he does anymore. Me reminding and nagging isn't working, so he can be in charge of his own life. If he puts himself in an early grave, it's not my fault and I refuse to take any blame for it. I have done everything I possibly can to make him take care of himself and he won't.

I know this post is really long, and I got off topic, but I guess I needed to vent. We are going through so much crap right now, and I just can't take it anymore. I don't want to do this anymore. I wish that I could just walk away, but I'm not that kind of person. I know life is hard, but lately it just seems too hard. Everyone is telling me to stay strong for Jordan, and not worry so much about what's going on. If it were that easy, wouldn't I be doing it already? I don't know how to cope, I don't know how to find my way out of this dark place I'm in right now. And if I'm being honest, I'm not even sure I care to get out of it. I'm ready to just give up. Jordan obviously gave up on himself, so why should I keep fighting for him? What's the point? I already sat down and talked with him not that long ago about how I need him to step up, and he told me he would. I really believed him, but nothing changed. I feel like there is no reason to ask again. It will only make my frustration worse.

If you have actually read this far, thank you. I'm sorry for complaining and rambling so much. I know most of you are in way worse situations than I am, and yet you manage to hold it together. Maybe I'm just too young and immature to be able to do that. Or maybe, and more likely, I am just a heck of a lot weaker than all of you. Good luck to everyone with your struggles. I hope things are going better for you.