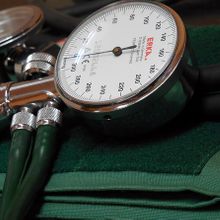 The first time my mom bled too much was in December. She fell outside my sister's home, hit her head on the cement, and bled profusely from her nose.

The second time was earlier this month because of a bleeding ulcer. They finally stopped the bleeding with an emergency surgery to remove part of her stomach. Her recovery after the surgery has been up and down but we thought we finally hit the upswing on Friday, with discharge planned for Monday.

But, then we had Saturday, when she started bleeding again. Two scans later, we confirmed she really was bleeding but just not sure where. She had a colonoscopy (her third in two weeks) yesterday. After she returned to her room from the colonoscopy, my dad and I met with the gastroenterologist to learn the results. When the doctor entered the family waiting room, I knew immediately the news was not be good. He had looked everywhere he could in her stomach and colon, he explained; he saw fresh blood but he couldn't pinpoint the source. He was very kind and professional as he spoke with us but I could tell he was upset. He explained that he spoke with the surgeon and radiologist already and that my mom was going to have another procedure immediately, with hopes that radiology could find the source of the bleeding and stop it. By this time, my mom had had several procedures and I couldn't quite pinpoint this one she was about to have. "Remember the one she had the day before her surgery" he said, "that's the one." For some reason, his explanation was just what I needed to hear. He remembered the details of her situation, he remembered what did and didn't work, he remembered her. I know that may seem silly, but his words about the shared history (my mom, him, her procedures and us) helped me.

As soon as he left, the surgeon came in. He plopped down into a chair and shook his head. He was really bothered by the situation, that they couldn't figure out why my mom began bleeding again. He talked about having my mom going to another hospital, bringing in a second opinion but he didn't know what they would find that they haven't already. "I've never seen anything like this in the 30 years I've been doing these surgeries," he said. He understood how upset and worried we must be and assured us the team wanted to heal her. "When I left here Friday," he said, "I was so happy to start my weekend with the good news at how well Sally (my mom) was doing."

We spoke a few more minutes and then he left. Once he left, my dad and I talked out the situation. Should we consider transferring her to another hospital? Would she survive a transfer? Did we feel comfortable with her team--the gastroenterologist, the surgeon and the radiologist? Did we overlook questions we should be asking? Could we do more?

We both agreed that we liked her team. I liked that the surgeon was older and the gastroenterologist was younger--a nice balance between wise and gumption. We liked the care she was receiving. We felt everyone was doing everything they could.

We returned to my mom's room to say "Good bye" before she left. To say my mom was having a crabby day would be an understatement. She was pissed she was not better, that the doctors weren't making her better. She had said so to the surgeon that morning.

After my mom left, my dad and I went to the cafeteria for an early dinner. Again, we rehashed what had happened and what was happening. Round and round and back to square one: We felt we had a good team truly dedicated to helping my mom. During each of these conversations, we were calm and realistic. We understood that my mom could die if they couldn't stop the bleeding. My dad only lost his composure for a few moments once we returned to my mom's room to continue waiting. "What are you worrying about, Dad," I asked. "Everything," he said. "I guess we have to take this one day at a time." I had encouraged him to keep the one-day-at-a-time perspective a few days earlier when his worries were piling up. He worries a lot.

Three hours later, we heard the good news: The radiologist found and stopped the second bleed. We told my mom after she returned to her room. I've not seen relief like that before in my life. She complained about what her butt had been through and said, "If they were going to put my butt through any more, I was going to say, 'I'm out of here!'"

So, we're back on track. We hope the bleeding remains in the past.

So glad the radiologist was able to locate the bleed and get things under control. Hope it's smooth sailing from here on. I'm due for my next colonoscopy and still feeling traumatized from the one I had five years ago. I can't begin to imagine what three in two weeks must be like. I think I'd feel compelled to aid and abet your mother as she made her escape! :)

I can only imagine the roller coaster of emotions you &amp; your family are going through. I hope that after the last procedure your mom went through that she is on the road to recovery &amp; can go home soon. \nPrayers &amp; hugs to your family!\nMaria

Denise, I think my brain lost traction when I read your mom had three colonoscopies in two weeks. I could hardly read on after that. For goodness sakes, what is left to look at? I am awed awed awed at all of you and your incredible grace. So very glad the doctors were able to stop this bleeding. Thank you for continuing to bring us on your journey. Please let your family know we are walking the path with them.

Oh Denise, my heart goes out to you. Know you are in my thoughts and prayers.

<a href='http://www.caregiving.com/members/denise/' rel=\"nofollow\">@denise</a> continued prayer for you and your family, I can imagine the stress of these recent events, love the the communication and mutual support you guys are providing each other, it will serve you all well both now and later. agree with @EllyGdaughter take some well earned rest... maybe only look at Caregiving.com 4 or 5 times today :-)