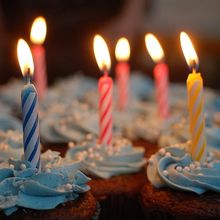 What a difference a year makes!

Last year (on Mom's birthday) we were in the hospital. This year we were at home. I mucht prefer being at home! We have SO much to be thankful for. We have had four major blessings within the last month and I am SO excited to write a good post for a change!

The first blessing: Last year Mom's bed broke down (adjustable base and mattress) and it was causing her great amounts of pain. It was lopsided and just miserable for her. A friend heard about the issue and started to raise money among friends for a new bed! We were in tears and SO thankful. We got her new adjustable base and adjustable mattress and she is SO much more comfortable! God is SO good!

The second blessing: On her birthday, for a few hours, her pain wasn't at a 10/10! She had a little bit of reprieve!

The third blessing: She has not been able to use her oxygen concentrator because it is SO LOUD. So she has just been using tanks which are difficult for her. After MANY phone calls we found out that they make a low decibel concentrator which is much quieter.  After MUCH debate, we were able to get one and it is so much better! My question: Why not make ALL of them low decibel?

The fourth blessing: We haven't been in the hospital for two whole months!

We have so much to be thankful for.  After the previous year we have had, it is so nice to have great things to write about!