ejourneys
Our modem went on the fritz on Saturday after hiccuping for days. The last time this happened, we could just drive down the road to pick up a replacement from our cable provider. This time, customer service wanted to send a technician over.

The good news is, my partner and I are communicating much better when it comes to her hoarding.

The bad news is, she's still a hoarder. That makes service calls fairly exhausting for me, due to all the prep.

At minimum, I wanted the technician to have a clear path to the modem and room to work. I wanted the empty food wrappers and vegetable bags moved. (My partner likes to clean them for recycling, but they pile up.) I knew that was about all that I could hope for.

My partner said she would start clearing space after her shower on Sunday -- which she told me late Sunday night that she was about to take.

She told me that again about an hour later.

About an hour after that, she said, "My shower will be over in an hour."

By the time she had finished her shower it was 2:55 a.m. Monday.

She needed time for us to transfer three five-gallon pails from the shower to the bathroom we use more often. She likes to collect her shower water for flushing.

Then she needed time to eat. But she was ready to hear my priorities for decluttering.

We spent an inordinate amount of time on her food wrappers. We send energy bar wrappers to TerraCycle, where they get upcycled into plastic products. My partner had the wrappers dotted on the rug underneath a table, in piles of five.

I told her TerraCycle doesn't count the wrappers any more. They just weigh them.

She said, "If I put one in a Ziploc bag and handed it to you, I think they would be unhappy."

Some minutes of discussion later, I asked, "May I gather the wrappers that are under the table?"

I offered to put a little note on the bag, saying it held only 20.

She retrieved a soap wrapper and wrote "20" on the outside in black magic marker. She was concerned about the perfumed smell. "People probably wouldn't want to eat that scent on a chocolate bar, but who knows? There's always somebody."

I explained that TerraCycle rewashes everything. Plus, the wrappers get changed into something else.

Then she discovered more wrappers on the floor. "There's only three over here, not a pile of five."

She gathered more vagrant wrappers. "I think this is five and five. Checking to make sure."

"Especially now that I've counted them," my partner said. "Ten."

Everything else went at pretty much the same glacial pace.

I asked if it was okay for me to stay.

I asked if there was something I could do. I had moved a chair and then the treadmill, after she insisted on measuring the length of the treadmill while I measured the length of the space where I wanted to put it. I convinced her the chair shouldn't be put in the hallway, where it could block passage. I asked her if I could move the two-wheelie. She agreed to that. Afterwards I went to my studio.

I checked on her progress about a half hour later. There were still piles on the floor that I wanted moved, but my partner was diligently sorting papers into folders to go into one of the filing cabinets. She had already picked up some clothes that had been draped over a chair.

I thanked her for doing what she was doing and added, "I very much appreciate it."

She thanked me for "being restrained."

I laughed and said, "Learning."

When I next checked on her at 7:30 a.m., she was asleep on the floor. Piles still needed to be moved. I moved them to an out-of-the-way area, taking care to keep them intact.

She awoke around 9 a.m. She was thankful that I told her promptly that I had moved things, and that I had kept her piles intact. This is tremendous progress from a couple of years ago, when she didn't want me touching anything at all. 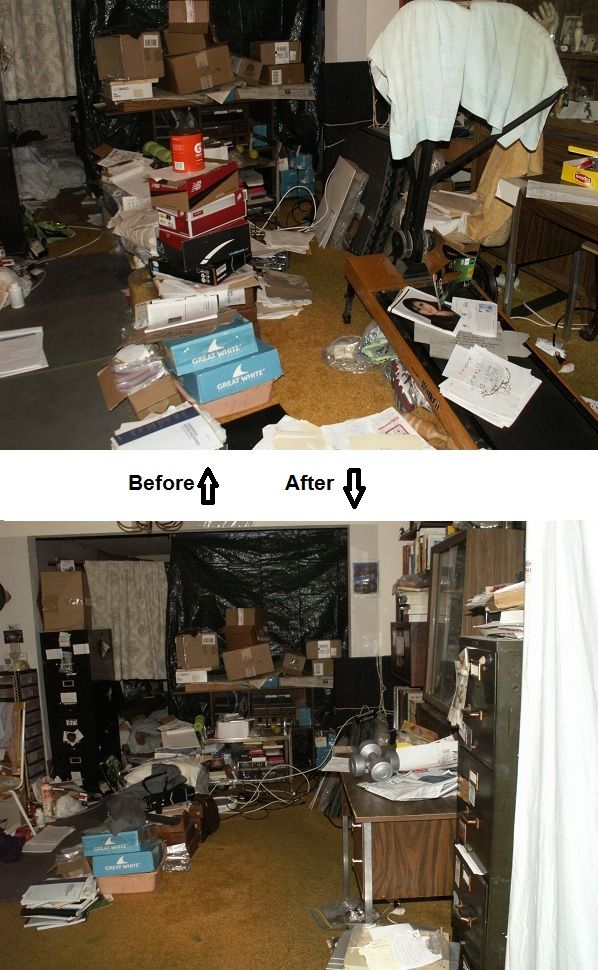 The cable tech arrived at a few minutes to 10 in the pouring rain. He actually lives down the street from us, he said.

I was happy that he had a relatively neat place to work and a cleared path to get there. He put the new modem in, redid one of the cable connections, and told us to see if we could get online.

I went to the studio and was whisked to my email lickety-split. I told him, "Works like a breeze."

My partner was in her "office den" as she calls it, a.k.a. the Florida Room. I had given her that room, which is her private space. A hanging sheet separates it from the rest of the house.

And since it is her room, she gets to live in it as she chooses. 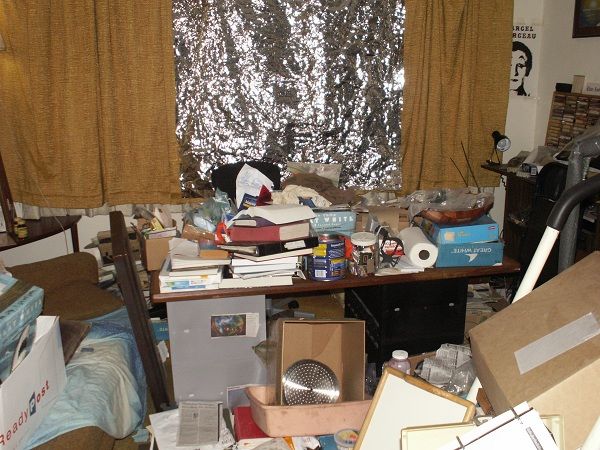 (This photo dates from about two years ago, but the space is relatively unchanged.)

No sooner had I reported back to the cable tech that all was well when my partner yelled, "I can't get online!" Which meant that the tech had to go behind the sheet and (for starters) walk over the sheet-covered couch cushions that my partner had put on the floor to serve as her bed when she doesn't want to sleep in the bedroom. There is no clear path to her desk.

I heard him tell her that sometimes it just takes a few extra seconds for things to kick in. Sure enough, she was online in a jiffy. I sat in the next room, caught somewhere between mortification and hilarity.

When he emerged from behind the sheet I said, "Sorry for the obstacle course."

"No problem," he said. Howdy, neighbor!

On Saturday night we received a call from a friend whom we hadn't heard from in a while. My partner had answered the phone. When our friend asked her how she was, the first thing she said was, "I've discovered my breasts!" (Part of her recent catharsis.)

Then she told him about her "brain surgery" CT scans in 1982. Bless his heart, he made a valiant effort and asked, "Is there any way you could see this happening without brain surgery being involved?" I thought that was an excellent way to phrase the question.

"I don't see how it can be anything else," she said.

He did a really good job on the phone; he was also very patient through her ramblings. He emailed me that he'd like us to talk privately. I emailed back that I need to call him on my cell phone, away from the house -- otherwise, my partner would want to join in and would pick up the other phone. From what I've read, boundary issues are often seen in people with traumatic brain injury, and my partner fits that profile.

Speaking of boundary issues, I had spent part of my offline Sunday doing yard work, filling seven 30-gallon bags with yard waste with more to come. I also inspected our soffits, because our local squirrels have been setting up a ruckus starting at around 4 a.m., and I don't like where the sound tracks back to. I think they might have a nest up there, which might mean they're in the attic. I need to photograph the soffits (the relevant corner shows what I think are signs of squirrel residence) and call our extension school for guidance.