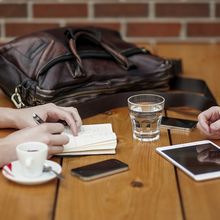 It finally happened. Weeks after hearing word that my brother was going back home, some 750 miles away without a reason, he finally came to me and told me himself. Still, things aren't completely clear.

For some reason, he chose me, his least favorite family member (sibling rivalry is real, folks) to tell why he was leaving. Although he's working full-time, extra hours, and has a management position, he claims the money here is not good, so he's going back to his old, seemingly crappier, job. We all know and understand that his home, wife (and dog) are all down there.

The first question mark came when he told me he'd be coming back up every week. That other job must be GREAT! That's a lot of gas or airfare and car rental. Then came his plan for moving forward (he even printed it out!): He proposed hiring a friend to administer PT, give care and companionship to my parents -- Dad mostly. This guy also happens to live 35 miles away and, he admitted, is without a reliable vehicle.

He'd be in three times a week from 10 - 7. Originally, I was thinking overnight hours when my dad is most vulnerable to falls. I'm thinking three nights in a row as Mom is pretty good with handling Dad during the day. Nope. He was proposing Monday, Wednesday, Friday (three nights in a row could provide a nice break for me!) and 10 a.m. - 7 p.m. Has he met my parents? My father would chew up and spit out Stranger Caregiver and my mother would be cold as ice!

The kicker is the price tag he plans to offer this lucky person: $240/week. Don't bother, I'll do the math: That's $960 per month. My folks aren't poor, but they're not rich. They could probably afford that, but good luck selling it (no, he's not run it past my folks)! Personally, if one of us are going to be here, I don't think we need that much paid, outside coverage.

I will say this: For once, he seemed open to other ideas, he listened to what I had to say and it doesn't seem like this plan is etched in stone. Most importantly, he spoke to me with respect and without anger or arrogance. It's been quite awhile since I've seen the brother who was attempting to mend the fences between us since my birth. I have some of my own ideas about scheduling and what aid to pay for -- and I actually spoke to Mom!

That's wonderful that you had a calm and deliberate discussion with your brother. It's all a process and it's awesome that you've started a process that allows you both to be heard.\r\n\r\nI'm hoping you are all doing okay. Let us know when you have a chance.

Glad to hear that there could be a healing in progress. Just accept what is with your relationship with him, I wouldn't look much to the future if one of my own siblings came to me with that. I am glad to see he is trying to help and I hope the therapy stuff all works out in the best interest of your parents and whoever is caring for them!! Great blog, thanks for sharing.