Can I Get Some Attention Around Here!

Can I Get Some Attention Around Here! 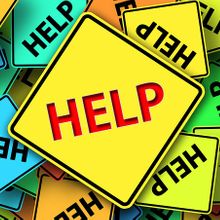 Well, it seems not… my sister called 911 yesterday while in the nursing home. The 911 operator called the nursing home instead of dispatching an ambulance. That is what the nurse told my oldest sister.

Annette goes to extremes to get attention. And I have to say, if my oldest sister didn't have visual confirmation and test results that verify that she is ill, we would be doubting her word and thinking she was calling "wolf".

Annette's physician called her personally on Sunday to let her know that the cultures for her UTI /kidney infection showed that the current antibiotic wasn't working so she ordered a new one. She has continued to run a low grade fever since last Wednesday when she first went to the ER. Annette said yesterday that is was 102.1 but yet it was recorded in her chart as between 99 to 100. Did they not record it or is Annette exaggerating for attention? We really don't know. But we do know the nurse on duty that one morning didn't even know she was sick, take her vitals or give her meds.

This morning, my oldest sister stopped by the nursing home on her way to work because Annette had broken out in a rash, more than likely from a reaction to the new antibiotic. When she talked to the nurse, she still hadn't called the doctor's office even though they were aware of Annette's rash at 5:00 a.m. meds. And even though the nurse said out loud that it was probably an allergic reaction, she gave her the next dose anyway because she"didn't want to get in trouble for not giving it to her." OMG!

The one nurse told my oldest sister, "You know she has behavior problems." My oldest sister said she nearly blew a gasket, like da, we have been dealing with her for all our lives!  Part of me wants to be a fly on the wall at that nursing home to figure out how bad it really is and how much my sister is exaggerating and confabulating. My guess is both are true to a large degree.

I've thought about calling the nursing home to give them "tips" on handling her excessive need for attention. I doubt if they would welcome my comments, and it really isn't something that would work well over phone anyhow. They really need an in-service program--how to deal with the Borderline patient. I thought about driving the four hours to go sit there for a day and observe. I'll hold off on that idea for now. Tomorrow, Annette has an appointment with her physician and my oldest sister is going with to discuss new placement.

And hopefully she doesn't go into anaphylactic shock from that last dose. My older sister is expecting a call within the hour and I know she will be there on her lunch break.

(My sis should take your survey Denise, she works full time and had been my mom's healthcare rep for years. She thought she was done. Instead she got a 4 month break and on to Annette. I feel so bad for her. I'll ask her to, but I'm 99% certain her response will be, "I don't have time for that!")

Thanks Pegi, Yes, we are aware of the compare. And we know of a couple of decent nursing homes in the area. But the problem was that the doctor had put her down for assisted living, and there seems to be no such thing in her state for people on medicare/medicaid under the age of 65. She is only 55, so they placed her in that home since it was intermediate care facility that medicaid would cover. --- At least that was the story we got from the social worker for the last placement. Now, Annette just told me today that PT said she could go to assisted living. She keeps pushing for that because she wants more freedom… she just doesn't get it or just doesn't want to hear it. I hope that once my older sister talks to doctors they will approve skilled nursing since she has soooo many issues. At least that is our hope. I'd be thrilled for her if they found an assisted facility… but I won't hold my breath. Back to square one.

UPDATE: My sister had very frightening night in ER before the got her stabilized enough to move her to the ICU. She went into septic shock. This evening she is still in ICU but is doing much better. My oldest sister literally saved her life yesterday by listening to her gut despite the nursing home and the doctors office telling her to wait until her appointment today and taking her to the better hospital 50 miles away. What blows my mind the most, is that the nurse's at the nursing home didn't even take her vitals. I still am having a hard time wrapping my head around this!

Oh, Jean, this is so upsetting and awful. It's heartbreaking that your sister didn't receive the care she needed. \r\n\r\nThanks so much for keeping us posted. Let us know as you know more.

They are admitting her, initial impression before all tests are in is that she has sepsis.

Update: My oldest sister made the decision when she saw Annette after lunch to drive her to the better hospital 50 miles away. The nursing home said they would \"watch\" her and that's all they did. They hadn't even taken her BP or pulse all day. Her face had swollen more since morning. At ER now &amp; her blood pressure had dropped way below her norm and she has tachycardia. I hope they admit her. I don't want her back in that place!