Can It Get More Depressing?

Can It Get More Depressing?

0
This is perhaps the hardest thing to report to my fellow caregivers. My husband started showing more and more symptoms (mostly due to C.O.P.D. oxygen deprivation, they thought) ever since he came back from a two-night home visit over Christmas. Then, much too suddenly, but then again perhaps at just the right time for him, he breathed his last at the care center on February 2nd, where he had been forced to reside for the last 14 months. I say "forced" because he referred to it as "jail", even though he had adjusted quite well and admitted it was a pretty nice place, if he had to be somewhere. It just wasn't home.

I then poured myself into preparing for his memorial service three weeks later. It was the last thing I could do for him, and it was so comforting for me and our daughter to hear all the nice things people said about him. Even though it was an icy, "snow day" for this Nebraska town, with several churches even closing their doors that morning, we still had a full church come out to celebrate and remember his life.

I honestly don't know if I'll be able to contribute anything to the caregiving community any more, but then a part of me remembers that the changes that caregiving brought to my heart will always be there. I'm not sure how long this time of grieving will last, or what form it will take, but I do know the One who has brought me through everything will not go away. I've still got Him on speed-dial (aka prayer). 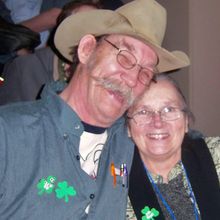 I also, am now a former caregiver. My husband passed away on December 27, 2017 after facing cancer with optimism and fighting it fiercely for 6 years. I did not contribute here very often during his illness but found great comfort here time after time. I would like to thank all the openhearted people who are involved in this much needed resource for people who are often living a quite lonely life, filled with such great demands and responsibilities.

Thank you for sharing your heart with us. Your post touched me and I am grateful you chose to share part of yourself at this particular time in your life. I learn from posts that are about coping with the loss of a loved one. What I learn will be put to good use when it is that time in my life. Thank you and God bless and keep you!

Teresa I am so sorry and I am just now seeing this due to some medical issues of my own and trying to catch up. Your husband sounds like he was a wonderful man. He will always be with you in one way or another but no one can tell you how to handle your grief that is yours alone to deal with just know that we are here. Hugs and prayers for you.

Teresa, I am so sorry for your loss. What a beautiful tribute of love for each other. I know there are not adequate words, but you are in my heart and prayer. The caregiving community shares such a touching bond of life and loss. You are supported and loved.

Teresa, I have read your blogs and drawn inspiration from your courage and faith as you walked every step with your husband on his pilgrimag. No more sickness, no more pain. I pray for you a happy and fulfilling rest of your life.