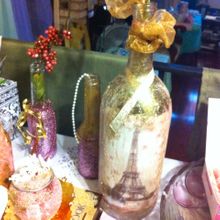 As the holidays approach I have mixed emotions on what to expect from Mom during the festivities.

This past week end we hosted an epic baby shower for my son and his girlfriend. I considered it a dress rehearsal for the upcoming holiday season.

With my new addiction to Pinterest and vintage shabby chic decor (see how I made them on my website), I think I went over board on the decorations. I made so many that I think I have enough to sell for the caregiver craft fair this month.

Unfortunately decorating too early confused Mom into believing the candy table was part of our luxury buffet on a cruise ship. I am not making this up.

I came downstairs to hear Mom calling my husband "Captain" and asking where the other guests were. My husband over did the role play and put on his chef hat that I had bought him a few years ago. So I played along and told her I was the event planner and I wasn't quite done with the decorations. To make her take a nap we told her the ship was departing soon and to go back to her cabin. 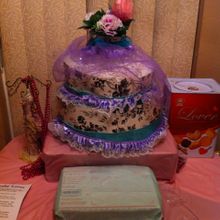 The next day she thought it was her birthday and was going toward the gift table to open the baby shower presents. I told her we had to wait until the guests arrived which was a few days from then. I had paper lanterns, shabby chic bottles and diaper cakes that looked like real cakes so it made it worse. Maybe I should have made a Depends diaper cake for her? That's a picture of the diaper cake to the right.

I started thinking of Mom as Mrs. Haversham from the Dickens novel, Great Expectations, because every day Mom visited the buffet table until the actual day of the baby shower. I almost started wondering if I had actually had the baby shower already myself but the clocks weren't stopped.

The day of the shower Mom thought it was her birthday again because all of our old friends were there. It was at least 60 people. The mom-to-be made out pretty good.

Mom kept eating cupcakes at every turn and tried to leave a few times. For Thanksgiving I will be prepared. She probably will take my drumstick off my plate again though. She had a good time and even played Baby Shower Bingo and Baby Lotto. The guests got pretty competitive though with the Mardis Gras game I made up. Everyone wore beads and if someone said "baby" you take their beads. Mom told me it was nice that everyone came so sparkly and dressed up. I didn't explain it was part of the game. So all in all it was a good time and it was a great dress rehearsal for Thanksgiving.

I'm going  Thanksgiving food shopping today. I have learned not to decorate too early or I will be subject to being Julie from the "Love Boat" again along with the hubby portraying Captain Stubing.

Until next time, me hearties. Keep calm and I hope your ships stay afloat with smooth sailing for the holidays.

Angie, you are a gift story-teller. :) I also love how you and your husband roll with the punches, making your mom feel comfortable no matter what she needs to be comfortable.\r\n\r\nYour decorations are awesome!! The party looks like it was a huge success.\r\n\r\nWhen is the baby due??? And, do you know boy or girl? So exciting!! You will be an awesome grandmother.

The decorations look amazing, and you are so kind to still include your Mom despite the things you had to take into consideration. What a great example of taking caregiving in stride and looking at the bright side. This made me smile this morning! I'll have to check out your website.

What a great post, MissAngie. I was right there in your house admiring those baby shower decorations, and in awe of your grace as you kept your Mom feeling included in all of it. Your decorations looked like great fun, and I wish all the best for your son and his girlfriend. Most of all I respect you for finding a way to keep her from eating anything she shouldn't, and all with a sense of humor. Keep us informed about that baby.