Caring for My Husband with Colon cancer

Caring for My Husband with Colon cancer 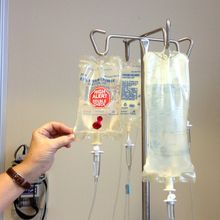 (Editor's Note: Welcome PdinTX, who cares for her husband, to our blogging team. You can connect with her on her profile page: @pdintx.)

This cancer started in March of 2013. He had surgery on April 1, 2013. That was when I knew it was going to be a battle. A two-hour surgery turned into a five-hour surgery. The doctor finally came and told me it was worse then he thought and that we should plan to be in the hospital for seven days not two. It was next day before my husband was awake enough for me to tell him. We went home in five days. We made an appointment with cancer doctor, went in three weeks to the cancer center. That is when doctor said Stage 4 and five years to live. Started chemo that day, 12 rounds, then CT scan. The doctor said no cancer anywhere. We were so happy! The doctor said come back in six m0nths. My husband always wanted to go to Alaska so with our new trailer, we did. We also went to Canada and had a great time, worry free. We were gone over two months. When we got back, got caught up on everything. Thought everything was going great.

My husband started feeling bad with a pain in his stomach. After four weeks, I told him it was time to go to the doctor. I called our family doctor. He said, Meet me at hospital. They pumped four liters out of his stomach and took a biopsy of the liver. The liver turned out fine. Fluid was cancer again. He started chemo, another 12 rounds. This time CT scan showed nothing but tumor count did not go down as much as we hoped.

The doctor said to come back in four months. We went on a short trip. My husband started having stomach pain again. When I called the cancer doctor, I told his nurse we needed to come in. She thought it was too early. We went to see the doctor, who ordered a PET scan. In two days we were  getting chemo again. That was when we found out it is in his lungs now. He has had pain in his stomach since then. He takes pain meds, which sometimes helps but most times it does not.

Our next appointment on the 15th. That is where we are now. I'm doing this mostly on my own.

Thank You so much for sharing. I'm new here and it helps to know I'm not alone. Continue to cherish every moment. It sounds like you both have made some wonderful memories.

I'm so glad you are blogging, PD! \r\n\r\nYou were so wise to get into the RV as soon as you could and travel. Those two months must be precious memories to you now.\r\n\r\nI can understand why you both are so tired. You've both been through so much. I'm glad you're here with us--I hope it helps to be with others who understand.