0
A Three Dog Life is the title of a book written by Abigail Thomas. It is a story of Caregiving. I haven't yet read the book, but I plan to.

Roxie is, we think, German Shepherd mix and she is 11 years old. I found Roxie, mud and flea infested, walking down our street. She was way too little to be out on her own, it was apparent she wasn't being cared for, so I brought her home to my two very happy young boys. We had lost my dad less than a month before this. In the past two years since Roxie has been "elderly" she has become very territorial. She doesn't get along with our other two dogs and we have to keep them separated. It seems Roxie has some dementia going on. We do what we have to do to keep her happy. She's always been a tennis ball chaser, she will chase and fetch all day if someone will throw the ball to her. In her old age she can only fetch about five times or the next day she won't be able to stand or walk. I give Roxie daily medication for her hips and joints. Every day I fix Roxie an egg over medium and in it I hide her 1000 mg dose of fish oil and the same amount of glucosamine. This is my Roxie! 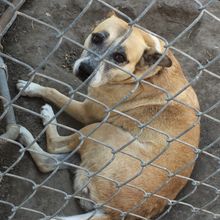 Stella, who is 4 years old, is a brindle Bull Mastif mix. One day about 3 1/2 years ago, my son David had been to his dad's house and there was a stray dog in his dad's yard that his dad had been feeding. His dad doesn't have a fenced yard and couldn't keep the dog. David told me he wanted this dog. I told him more than once we couldn't keep it, we had Roxie already it would be too much for us. That same day I had to go to my ex'es house to pick up my younger son. When I got out of the car this dog came out of nowhere, jumped in my arms and start licking my face. I called David and told him to come get his "damn" dog from his dad's house. Stella is really kick back. She doesn't cause any problem, she loves all of us and both of the other dogs. Unfortunately the other two dogs who both think they are boss get Stella involved in their fights and Stella now looks like a Junk Yard dog, with the scars she has on her face. In the last year Stella has had trouble with her hip and after taking her to the vet found out she has hip dysplasia. Of course Stella's pain is worse when it's cold.  Since finding out Stella has hip dysplasia we've given her 1000 mg of fish oil, 1000 mg of glucosamine and an anti inflammatory when she needs it. Stella gets her meds daily in an egg over medium. This is Stella. 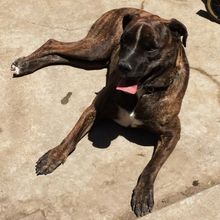 Zeena showed up at our house about a year ago. My son David was working on his truck, it was a very warm summer day and this very nice looking little black lab looking dog showed up and hung out under David's truck while he was working on it. Of course David gave her water.  The next morning she was still here, so of course we gave her food. That was it. I told David we couldn't keep her, we had two dogs already that we had to keep separated what the heck would we do with her?  Well it's been over a year and Zeena now lives in our backyard with Stella. Zeena is very skittish, she's afraid of the waterhose, the blower, the lawnmower and the foot! I'm sure she was mistreated before we got her. In the past couple a weeks Zeena has been scratching non stop, she scratches and scratches and bites on her back. We treat the dogs for fleas and ticks, we keep the yard as treated as possible she had no fleas on her but today she had to go to the vet because she had gouges on her back where she was biting and scratching. The vet said Zeena is allergic to fleas. And she had two fleas on her. The vet shaved Zeena's back treated her with iodine, gave us a salve to put on her back, an oral antibiotic and a cone. I now have a cone head Zeena Beana! Daily I give Zeena an over medium egg with 1000 mg of fish oil to which I will now add an antibiotic. This is my Zeena Beana. This is my little girl! 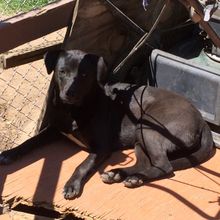 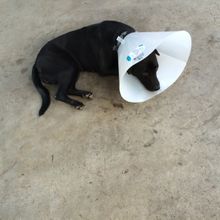 So, I am a Family Caregiver, I am a Pet Caregiver and it is definitely a Three Dog Life.

Thanks Lillie for sharing your dogs with us! You are such a soft hearted caregiver for your pups! That's a lot of eggs you cook!!!

I have a soft spot for animals, too, Lillie. Thank you for sharing some about your four legged family members. I also have a rescue dog named Linus. He is half Poodle, half Jack Russell. I guess that makes him a Jack-a-Poo. He is great therapy and brings a lot of joy to everyone. Linus eats dinner with his \"Grandma\" (my mom) every night and cleans up all of the food that falls onto the floor. I spend most nights with my mom, and he likes to sleep under her hospital bed. They offer so much unconditional love, don't they?

Thank you <a href='http://www.caregiving.com/members/sara32742/' rel=\"nofollow\">@sara32742</a>. I'm feeling like a fool for even writing and posting this. So many others have such tragic stories and here I am talking about my dogs. So thank you, I appreciate you.

You a such a good doggie mom!