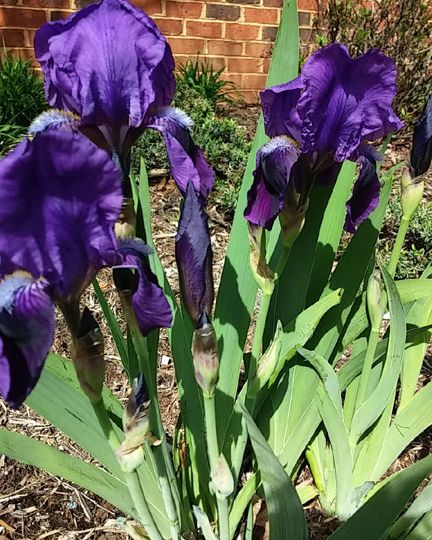 Catching Up with Spring


I've been absent for a while, and I think it's because I finally deflated after Mom's death. When I couldn't get to Dad's house for the holidays, I just went into a funk and winter didn't help in lifting me up at all. And, my blue moods aren't very sociable.

First, Dad -- wow. He's doing great for an old dude. He swears Mom put a curse on the house, because since I was here last his toaster oven, microwave, and computer all broke. He did a great job shopping for the microwave and toaster oven. The computer, however, took a little help from my husband and me.

While the computer isn't the same, Dad seems satisfied. It's a much less expensive refurbished model that didn't contain Spider Solitaire. I spent two days searching for that app alone.

Dad had some problems with his back and his doc thought that Dad had developed arthritis. Dad and I both thought differently...we both agreed that he probably had a pinched nerve. So, dad went out and purchased a "teeter." That's a non-electrical machine that you lie down on, hook your feet in some leg holders, and then hang upside down. Dad's heart doctor approved it, and Dad's loving it. And, it's working.

On another note, my marriage is better. My husband and I now are more communicative, and there's a deadline on this trip. Both those factors alone are helping.

My poor daughter, though -- about two months ago she was diagnosed with varicose veins, but I have yet to hear the words, "deep vein thrombosis." Unfortunately, after we planned my trip, we learned that her condition was escalating rapidly with a propensity to clotting.

About a week ago, while I was away, she had to undergo an endovenous laser treatment on her left thigh. While we thought that this simple laser treatment would remedy most of the problem, we were wrong. Her adjacent veins haven't "shrunk" like they should, and she developed a rather large clost in her upper thigh.

Today, however, after being on blood thinners for four days, the clot is disintegrating. She doesn't need to return for a month, and then it would be to talk about performing another procedure...this time on her left calf.

I feel for her, as she's far too young for these problems. And, it hurts not to be there with her, but (like my mother) she didn't want me to go through that problem with her when I had to take care of some things with Dad. I hated that she even had to make that choice. But, she's feeling more upbeat now, and it was great that she could travel to Dad's with me at the beginning of the month to see her "grampa" for the first time since Mom died. She'll be good, and I hope she'll be thriving soon.

Lots of other things have happened in the past three-four months. Looking back, I'm happy to report they weren't all bad (except for my health insurance fiasco, but that's another story). And, I was happy to see that all the flowers and shrubs I had transplanted and planted at my folks' home last summer were still alive and thriving.

In fact, the Japanese iris that I transplanted are blooming. I thought they wouldn't bloom the first year they were moved, but they proved me wrong...and delightfully so.

I think, after I broke through a writing fog last night, that I'll probably be writing more. There's something about being healthier and being out in the garden that definitely lifts my spirits. That fact never changes, even though everything else moves on. Like the irises, we all seem to be thriving.