0
(Editor's Note: We welcome Laura, who cares for her dad, to our blogging team today. You can connect with Laura on her profile page: @lroehl). 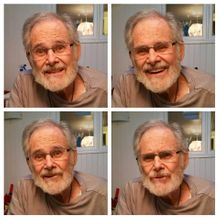 Dad is doing so much better since his hospital discharge on August 12. There were times after he got home that I thought we only had a matter of days left together. He went on hospice on August 16 because of congestive heart failure, and I think he is very relieved to know that he won’t be going back to the hospital ever again. He seems more light hearted, and we joke around more. He's gaining strength, too. This is good for him, and oh so good for me! I want his last days to be joy filled as much as possible.

Last Thursday, I figured out I can set my phone to take pictures by saying “cheese.” Dad got silly and started saying cheese and crackers. I guess you really had to be there, but it was so good to see the sparkle back in his eyes. I was so glad I captured the moment in a series of pictures. It's good to look at them now, in the quietness of this morning, and to know that even though his weight is up a pound -- again -- that we will still fit in more laughter, and make more memories with whatever amount of time we have left.

Friday night was a tough night. Dad was sitting on the commode and I was getting him ready for bed. He looked longingly at the shower. He said, "I sure wish I could take a shower." I replied that I could have the aide help him with one on Wednesday, but that's not what he meant. He said, "I wish I could take a shower alone." I cried as I realized that there are things I take for granted, like taking a shower unassisted, that he will never do again. Even walking unassisted. Doing anything unassisted.

It made me sad thinking of all the losses that aging, heart disease and stroke have taken from him, but then I thought of us laughing together, of all the memories we have had and are making now, and it helped.