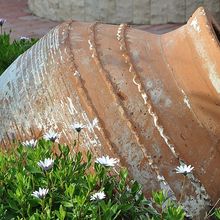 On my way home from work tonight, I decided to stop by the assisted living facility to see Dad. They eat supper at around 5:00, and he's usually sound asleep by 6:30, so I wasn't quite sure what I might find by arriving at 6:10. Dad was in his apartment, with the lights off, sitting on the edge of his bed, staring at his feet. When I cheerfully called out to him, he jolted and responded with an enthusiastic and alert greeting, "Hey baby girl! I was just thinking about you!" Good, he's coherent and happy tonight. Or so I thought.

I turned on the lights and immediately noticed a clear trash bag full of bath items on top of the dresser, and a large package of adult diapers in the middle of the floor. That's odd. He doesn't use those. I decide to not say anything and just see where the conversation goes, and I plopped down in the recliner across from his bed.

Not two minutes into the conversation, I know he's not having a good night. The conversation twists and turns, but the primary theme is his concern that the facility is about to go out of business. Well, more specifically, he's concerned the "restaurant" is about to go out of business. Here we go again. Since he moved in 3 weeks ago, he's been convinced that the dining hall is a stand-alone restaurant. It's a fairly large room, with three times as many tables & chairs as there are residents. The facility hosts monthly family dinners and other events, and are fortunate to have enough seating space to hold a lot of guests. On a typical day, the majority of the tables & chairs are not used, leading Dad to believe that the "restaurant" is not bringing in much business, and therefore must not be profitable. Evidently tonight toward the end of dinner he overheard one of the kitchen staff say "It looks like we are almost done here," and another replied "Yep, I think it's about time to close it down." Although I'm confident they were talking about how it appeared that all of the residents had come to dinner and had received meals, so they could start shutting down the kitchen for the evening, Dad interpreted this as more proof that the "restaurant" is going out of business. And since there's nowhere else to eat in the facility, he was worried that he wasn't going to have anything to eat!

He went on to say that since the place is probably going to shut down, he had started packing his stuff, just in case they shut it down in the middle of the night and he needs to leave quickly. Ah, that explains the bag full of bath items. He then went on to say that he found the bag of adult diapers in a hallway closet, and was trying to figure out how he might use them to pack up his clothes but he didn't have any safety pins or anything so was afraid that his socks might fall out of the diaper if he couldn't secure it somehow.

He then asked me if he had a car at the facility. He remembered that he had two at his house back in Illinois, but he couldn't remember how I got him to Texas and if he had a car here. I cheerfully reminded him that we flew on an airplane, and that I drove him from the airport to his new apartment in my car. I reminded him that he does not have a car in Texas, and that the facility won't allow the residents to have cars. He said, "That's a shame, because sometimes it would be nice to be able to just drive down to the corner store to buy a pack of cigarettes and some ceramics."

It's at moments like this when you suddenly feel like you are floating above your body, looking down into the room, wondering if this is actually happening. I crossed my legs and sort of kicked my left ankle with my right heel, just to make sure I really was awake. Unfortunately, I was.

I calmly attempt to reassure Dad that a) the "restaurant" and the facility are NOT going out of business, and b) if it were to go out of business, we would get plenty of notice and I would be there to help him move, and c), if and when he ever needs to move, I will bring a couple of big suitcases and some boxes for him to pack all of his stuff in. That seemed to satisfy him, and he sat in silence, staring at his feet.

I went over to the bed and sat down next to Dad, gave him a hug and a kiss on the cheek, told him I love him and that I'm glad he's here, living closer to me. I rubbed his back as he sat there shaking his head, and he finally said "I don't want to be a burden to you." I told him he is NOT a burden, and would never be a burden. And I told him again that I'm glad he's here and that we have this time together.

Driving home, I kept coming back to "cigarettes and ceramics." I am both horrified and fascinated by this experience. I envision the short-circuits that are occurring in his brain, and wonder and worry about what is causing it. How long has he been like this? Is this the aftermath of his recent illness? Is it caused by the stress of the move to Texas? Is the facility managing his medications incorrectly, or is he having some type of adverse reaction to some of the medication he is on? (Yes, I'm calling the facility nurse and his doctor tomorrow!) Or, is this just the natural progression that is to be? I guess time will tell.

TBD, I'm in awe of how you are dealing with your dad as a newbe caregiver. I don't have much to add to the other comments_mysql except, it dawned on me when I was reading Denise's response to you ... your abriviated ID is 'TBD' is abr for \"to be determined\". So apropos for the course of dementia and caregiving. \n\nI'm so glad you are with us here!\n

Thank you, Anita! When Dad was hospitalized in Illinois in September, he had a very bad infection which caused some short-term, but very severe, dementia during his stay. I learned SO much from the nurses who were caring for him. I always viewed nursing as a highly-skilled, rather procedural job, but through this experience, I learned that there is also a great deal of creativity and improv involved! Just like your advice, they taught me to never argue with him, instead, to simply play along and creatively redirect him. Many times it was like parenting a 280 pound toddler, but it really did work! Rather than dread going to see him, my brother and I were able to use our new tools to feel some sense of control and peace when we were with Dad. Having Dad near me now, and seeing some of the dementia come back, I am less freaked out and more skilled to deal with it. It is still sad to see him like this, but I am able to separate the \"current\" him from the \"real\" him - and I'm able to keep him (mostly) happy and safe.

With my Parkinson's, I can have trouble with word retrieval, especially if I'm tired. I've done that kind of thing where I say something that sounds like the word I want, but isn't at all. The difference is, at this point, I catch myself immediately. It's embarrassing, though.

TBD, I'm thankful by the time my mother started getting really \"squirrelly\" (which was her own accounting for how it felt) I was blogging here on a regular basis. The feedback I was getting was priceless and I would never have survived intact without it. However, the process of blogging itself was what I had to do for myself whether anyone read it or not, and alot of times it was hard to post. I remember one of the comments_mysql on my post was \"my grandmother never does anything funny\". It was writing with a certain point of view that made it bearable, and I can see you have that point of view as well. If the time comes and it's not \"funny\" (loose term) any more, understand we understand. And just keep blogging; you are doing a great job.

A couple of updates:\n\n1) I found out that \"ceramics\" is a slang term for e-cigs. Interesting! Now, I highly doubt Dad has ever smoked an e-cig, or has even seen one, but perhaps he's heard the term on TV. Or, and this is just as likely, he meant something entirely different (candy and coffee are two very possible options with him!). We'll probably never know!\n\n2) He called me this morning while I was driving to work. He was very happy &amp; excited, and proudly announced that he had just been told we won that camper (aka RV) that we had bid on... Uh.... what camper? He went on to remind me about the auction we had went to last weekend (huh?), and described the RV in great detail. I can only guess that he had mentally transported back in time about 35 years, when he &amp; mom were considering getting an RV for their retirement. They never did buy one, and he always regretted not getting one. \n\nWhen he called me, I was driving in heavy Dallas traffic in pouring rain, so it was not a good time for me to have that \"floating in the air looking down\" sensation. I took the next exit and stopped at a gas station to gather myself. He wanted me to take the morning off from work to come &amp; get him, so we could go get his new camper. Taking deep breaths, I cheerfully told him that I couldn't come until this afternoon, but that I would be there as soon as I could. I hung up, and immediately texted his nurse. The visiting doctor's nurse practitioner just happened to be in the facility, so they had her swing by to check on him. His blood pressure was low, he didn't have a UTI, his legs are swollen so lasics (sp?) are on order, they are adding potassium and vitamin K to his med regime, three different people audited his medical journal and everything appears to have been administered correctly...kinda looks like it's just the next wave of dementia coming in... here we go...