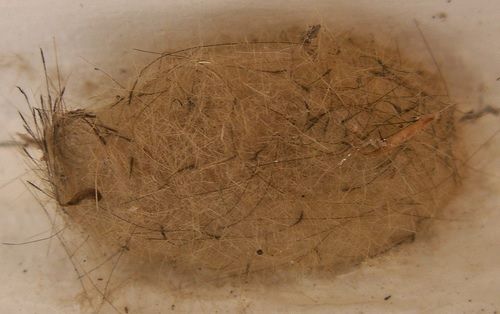 On Thursday night my partner thanked me for being a source of stability through her ups and downs. I was grateful for her gratitude, and grateful for that moment, which allowed for gratitude on both our parts. I know those moments are fleeting.

We've had -- knock on wood -- no crises here in recent days. It's just that the days have been draining for me on many levels. They've been a constant parade of her interruptions, her panics, her paranoid theories, her asking me to tell her my emotional responses to what she says, her bouts of anger and grief, her other bouts of at-times-inappropriate whimsy (as when she physically tried to stop me from going to the bathroom over my objections), the house's state of perpetual clutter, the fine art of negotiating with her, the fine art of restraining my responses, the paradoxical state of listening to her and tuning her out at the same time, her paradoxical state of micro-management and chaos, my finely-tuned translations and corrections (and her objections to my corrections) of what she tells the doctors, her litany of assumptions and explanations of her assumptions and tangential flights from her explanations, and on and on.

My partner wrote this on July 22, during one of our many "emotion talks": 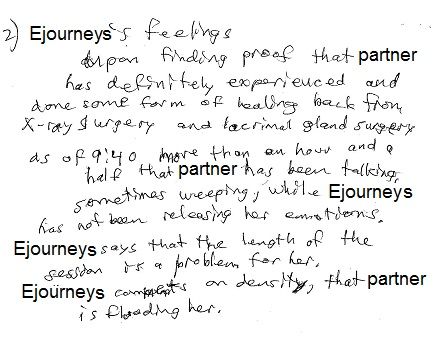 She had asked me for my emotional response to what she was telling me after she had talked (with catharsis) for almost all of our 90-minute-plus "conversation."

When I do respond, communication is difficult because of her difficulties with memory. According to her neuropsych test report, my partner's "ability to recall information immediately after its presentation was only in the low average to borderline range when compared to others of similar general intellectual functioning (9th percentile)."

In other words, 91 percent of her cohort perform better than she does. That severely curtails what and how much I can say before she gets overwhelmed -- for neutral topics, let alone for emotional ones. Not to mention that she and I often have different recollections of what healthcare professionals say. (Thank goodness for digital recorders.)

On the other hand, her score for word reading recognition placed her in the 98th percentile, which is near-perfect. After I had convinced her to leave me alone for a while (see below), I wrote and then handed her the following:

Correction to 's notes: has not found "proof" of "X-ray surgery" or "lachrimal gland surgery" performed on . recognizes that this is an area where her perceptions and 's differ.

However, is very proud of for all the emotional and other work that she is doing to work through various issues.

's lack of emotional response tonight has had mainly to do with boundaries. When does not respect 's boundaries (as defines respect), then cannot respond because she feels she has not been heard.

At 8:45 p.m. on Monday, July 22, informed that they had been talking for about 45 minutes -- more than twice as long as the 20 minutes and had discussed as a suitable length for discussion, especially of emotional issues.

suggested using a timer in the future, so that they would not go over 20 minutes. agreed.

then requested that they stop their discussion and table it until later.

kept talking. The time passed 9 p.m. continued talking, after asked that discussion be tabled for later.

kept talking and emoting through to 9:45.

While is proud of for facing her emotions and acknowledges that doing so is a very difficult process, cannot talk while is talking and emoting. Furthermore, was attending to something on the computer because she had requested that the discussion stop at 9 p.m. Respect for boundaries is very important to , and she felt that was not respecting those boundaries.

was not releasing her emotions at that time because had been monopolizing their discussion for most of that discussion. ( had brought up only one topic, and much of the time the discussion became 's response to that topic. had only a few lines of information she wanted to convey.) cannot express her emotions "on demand" when this happens. She is not a trained pony in this respect.

Since did not respect 's request to table their discussion for later, refused to say anything (because a request to to stop talking didn't work). 's refusal to engage in any conversation finally achieved the desired result of the conversation being tabled for later.

While 's views differ from 's views on exactly what happened in 1982, knows and acknowledges that 's emotions, anger, and grief are very real and legitimate. feels sad that is going through so much emotional upheaval. She feels hopeful that the catharsis helps to heal from her multiple traumas.

However, is wary about expressing her own emotions to a certain degree, because she often feels as though she has not been heard. She is afraid of inadvertently saying what for are trigger words, or exhibiting a trigger body language, or using a trigger tone of voice. When that happens, reacts against what is saying or how she is saying it, and feels immediately stifled and often hurt. When that happens, feels as though is stuffing 's emotions back into , because of all the corrections is making to what is saying or how she is saying it. When that happens, feels as though it is better to not have said anything at all. feels a lot of pain when she tries to make herself vulnerable and open up. She is, in effect, shot down because she is not expressing herself in the "right" way. She also feels stifled when keeps interrupting her.

cannot change who is or how she communicates when doing so denies her own sense of self and how she is in the world. She wants to know that she tries her best, but her best can go only so far.

My partner thanked me for giving her feedback, but did not elaborate further (until tonight, when she joked, "Does that mean you're a wild pony?"). To be honest, I'm not sure she's capable of that level of understanding, again due to her cognitive difficulties. According to her neuropsych report, she had "obtained only a low average score on the WAIS-IV Comprehension subtest, a measure of common sense or practical reasoning which requires ability to verbalize reasons behind common customs, rules or conventions and ability to verbalize appropriate action. This was significantly below her general verbal skills and is consistent with some impairment in judgment suggested by clinical history and examination." Her percentile rank in that subtest had been 16.

It's like being asked to explain calculus to someone who still has trouble with arithmetic. Only in this case, my partner really does know calculus. :-) Up until recently, just telling her I felt frustrated (or sad when she experienced pain, grateful when she felt better, or hopeful that her catharsis was helping), those simple terms had been sufficient. But now she wanted more detail, hence my note.

She saw the dermatologist on July 29; I have yet to transcribe that meeting. The upshot is that she does not have ataxia telangiectasia, as she had feared (to the point where she had been picking her red spots out of her skin, requiring bandaging and monitoring for infection, which fortunately didn't occur). Interestingly, she did not bring up her "ataxia" suspicions, but she did bring up her "facial surgery," to which I responded that there are no medical records of any such surgery. To which my partner responded, "Moving on."

She also wants to take more Synthroid and just had another blood test, which shows her TSH still within normal range. She was angry today with the nurse practitioner for asking her how she felt. When I tried to learn the reason for her anger, she was angry at me for asking "an excitement question." (From what I can gather, the nurse practitioner was upset that my partner had upped her Synthroid dosage on her own, but fortunately my partner had stopped doing that after a day.)

One negotiation had to do with the blood test itself, since my partner wanted me to drive her to the hospital (about 15 miles from home), whose lab is open 24/7, rather than wait for the next day when we could just go a few blocks to our local blood draw clinic. I was able to prevail on that one.

I can understand my partner's concern -- she's been gaining weight, and she's been lean all her life. (She also eats what I do not consider to be a balanced diet, but she insists it is.) She's also started to feel tingling sensations in her hands upon awakening. That sort of thing is a very common symptom of MS, but for all I know it could also come from her weight gain. We see her neurologist later this month, so I'll make sure we bring it up with him.

I've been thinking of the Serenity Prayer a lot, lately. ("God grant me the serenity to accept the things I cannot change, courage to change the things I can, and the wisdom to know the difference.") My partner insists on interpreting and doing things her way, and it's a crap shoot as to whether and how much influence I have.

I can get my work done when she is either asleep, reading, or on her computer; otherwise I become her sounding board. Sometimes I'm just full up and have to tell her to stop. (I've downloaded Free Stopwatch, which has proven invaluable for helping me keep track of my freelance work hours. I can just click Start-Stop-Start-Stop-Start-Stop when she's in Interruption Mode.)

At times like these, I spend "me time" with a book. Or with something mindless. There's isolation imposed from without, but I value the isolation I can impose from within. For that way lies peace.

You have a patience that goes beyond what words can describe. There have been plenty of times where I have blown up at Marc for things I know are quite clearly out of his hands. Having most of his brain swollen from his illness makes him forgetful and I forget this myself. I wish I had the mind to exercise half the patience you provide to your partner. Kudos to you for exuding such an exemplary skill.