0
Two vehicles were in front of the firehouse when I drove up at a bit after noon. I explained our situation to a firehouse captain and showed her my photos, which I left with her along with my contact information.

She said no one from the firehouse can come to the house, but she will call one of the fire inspectors and see if someone there can stop by. She will give us a call.

She said using the burner is not a good idea, and that it is too close to other objects. She didn't have a problem with the extension cord. Corporations couldn't do that, she said, but we could do that in the home.

She said she'd seen much worse as far as clutter goes. "You'd be surprised."

She said the burner does not pose a sufficient danger to warrant Baker Acting, which is done for extreme behaviors (e.g., threatening to kill oneself or attempting suicide, threatening or attempting severe bodily harm to self or another). She agreed that people who really need help can't get it.

She will put the house on record so they can be aware that we have a potential fire risk.

As I suspected, my partner now says we really don't need an inspector to come, because the firehouse captain couldn't say exactly why the burner wasn't safe. 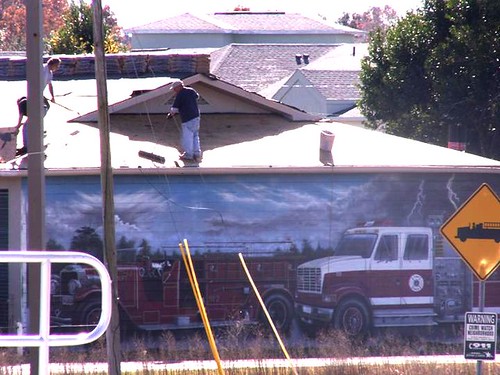 Our firehouse when it was being re-roofed in 2005.

Hi EJ--Thanks so much for keeping us in the loop. \r\n\r\nDoes this mean that you are back to where you were: Your partner wants the burner and you don't?