0
Back in June, I wrote that I had resumed typing up my handwritten journal notes. I've been doing that every few years since long before I met my partner. 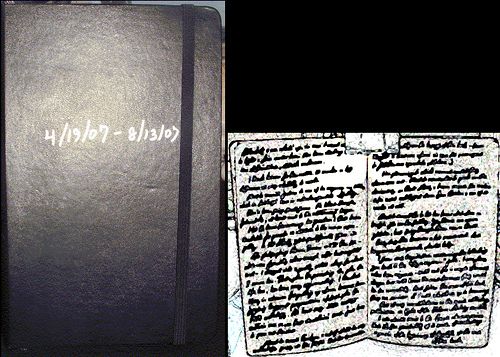 (A filled notebook from 2007. I mark the start and end dates on the front and spine with a silver Sharpie.)

In the compressed time from intensive typing, I've relived the days of my partner's extreme decompensation in the summer of 2008; her hysterectomy and aftermath in early 2009; my efforts (now with POA) to get a medical team together over her objections; one-shot visits from DCF inspector and social worker; the start (and later maxing-out) of therapy for both of us; the start of our ill-fated attempt to get disability benefits for her; and her second hospitalization of 2009, this time for bowel obstruction. Halfway through 2010 we were both still grieving the recent death of our 18-year-old cat, following the death of her 16-year-old best buddy two years earlier.

Tests and specialists followed, with long drives and SNAFUs, leading up to my partner's diagnosis of MS at the end of 2011. Scary falls. Scary behaviors. Threats from a therapist who had her information wrong; meetings with my lawyer and with a sheriff's deputy as I tried to get answers. My partner's diphenhydramine overdose and subsequent amnesia. Our turndown from disability lawyer #3 (and, later, from #4). And, during the height of our own runaround, two months of my also caring for a friend following a bad fall.

My attendance of Caregiver.com's Fearless Caregiver Conference. My discovery of Caregiving.com -- and, with it, validation and support that I had gotten nowhere else.

There was also the rest of my life. In the years compressed from journal key-in, I watched my world shrink like a time-lapse movie of a flower closing up for the night. I watched my beliefs and assumptions evaporate with the speed of a blast furnace.

And, blasted clean, I began to learn -- again, and on a new level -- to trust my instincts.

Everything became quiet and still in the stretches between crises. Peaceful.

And -- despite/because of our new reality -- wondrous.

The notebooks hold much more than events. They hold a lot of introspection, a lot of talking-to-myself -- along with various "to do" lists, dream fragments, story ideas, sketches and diagrams, contact info, conversations, and random scribblings. And rants. And raw heartache that in some strange alchemy morphed into paralysis, then into resignation, and then into found moments of bliss. My word count for 2008 alone was 95,704, not counting the entries on my pre-Caregiving.com "friends only" blog that had expanded on some of the handwritten text.

When I mentioned my key-in during one of the chats here, it was pointed out, especially by Pegi (@worriedwife), that there's a caregiving book in there.

I caught up on my typing yesterday morning while headphoned into ambient music on Pandora. I feel blessed that I have lost so much sleep not for a crisis this time, but in the course of following one of my passions. It's a good exhaustion, and a transformative one, this time around. I have a lot of raw (in every sense of the word) data to work with.

Yesterday I did not feel quite so harried when my partner expounded at length on her latest theory -- that back in 1982, in addition to the "CT scan X-ray brain surgery" and "lachrymal surgery" she claims had been performed on her (not reflected in any of the records), the doctors had also stapled her stomach. She claims this because she had lost a lot of weight while in the hospital (she had been hooked up to an NG tube for much of that time, plus she'd had to relearn how to swallow). Now that we have photos from her recent endoscopy, she's sure she sees the "scars" from such stapling in the images taken of her stomach.

Thanks to my journal notes and a timely coupon, I found and finally ordered a copy of Armin Schnider's book The Confabulating Mind: How the Brain Creates Reality.

Today, while my partner slept, I spent 3-1/2 hours weed-whacking, taming the waist-high jungle my yard had become. Near the end I was rewarded with a visit from an Eastern Tiger Swallowtail butterfly. It glided past me on its five-inch wingspan and vanished in the trees. 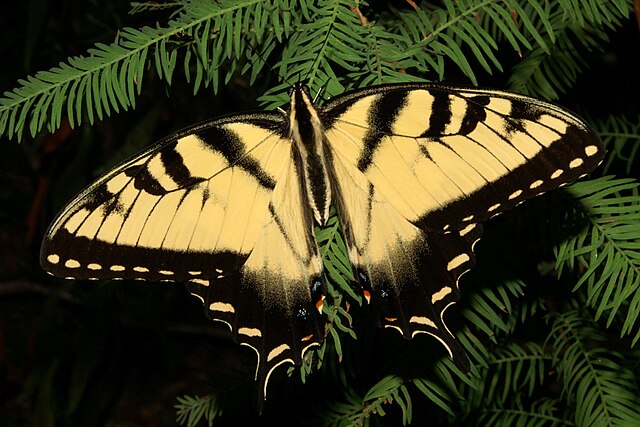 (I haven't taken a shot of this species yet. Source: Wikipedia.)

PS: I take my entry title from the album of the same name by The Moody Blues, my favorite band growing up. My personal anthem, then and now, is "(Thinking Is) The Best Way to Travel" from their album In Search of the Lost Chord.