Debbie
The last few days there has been a noticeable decline in Richard. Actually, if I really think about it, it began a couple of weeks ago with his nutrition. His intake of the nutrition liquid went from two cans a day (950 calories) to lately a half a can, and now and then a full can (475 calories) daily. But the last few days I have to prompt him to try to drink, even just a few sips.

Just the last couple of days he’s started needing help adjusting his position. See, he can’t lie down or sit up straight. Both cause pain and pressure. He sort of reclines 24 hours a day. And he slides down. And up until this weekend he was able to get back up himself. Now he can’t.

And there’s constant pain in his back. I brought him a heating pad which we keep on low. It seems to help – sometimes. And I do my best to get my hand between his back and the pillow to massage one of the areas that is causing him pain.

Yesterday, I noticed some blood on his hand between his thumb and index finger. He had been spitting up blood yesterday morning so I thought maybe he just got some on his hand and didn’t wipe it off. But no. When I began wiping it, there is a wound there. But he has no idea how it got there. He doesn’t remember scratching that spot.

The spitting up blood, that happens every few weeks. Unfortunately, he can’t open his mouth and his tongue is so swollen we don’t know what’s going on in there. But we assume that the tumor has made its way into his mouth as well as the fungating lesion on his neck.

Today, he actually agreed, without any apprehension or argument at all, to let Daisy (his Hospice nurse) help me (show me how to) put a diaper on him. Quite a difference from a few months ago when he had started to get a pressure sore and I wanted her to look at it. That time, he actually made me take a picture on my phone and show it to her as opposed to letting her look at his butt. Today, when he let me know he was unable to get up to use the bedside commode, and since Daisy was here for her weekly visit anyway, I asked if he’d let her come in and help with a diaper, he nodded yes.

He’s becoming more lethargic. He looks terrible. He won’t talk anymore, about anything.

I’m watching him waste away in front of me. I’m sad. I’m frustrated. I’m scared. I’m angry. I’m impatient. I hate seeing him suffer and I want God to take him already. And I feel guilty for wanting him to die. I can’t believe I actually wrote that down. But this man in my bed is not Richard – just a shell of him. His soul needs to be set free. He’s such a good man, he deserves so much better than this.

When we married eight years ago, we teased that we’d agree to 30 years and then we’d renegotiate. His brother thinks Richard’s hanging around because of that agreement. He’s kidding of course. If I have to live like this for 22 more years... But something is keeping him here and it’s so hard to watch him like this. 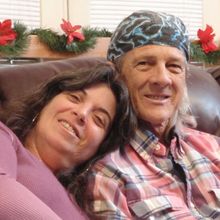 This is how I want to remember him.

Debbie, I echo what everyone else here has said. Everything you feel, all your tears, all your conflicting emotions, are real and valid and honest. I wish you and Richard all the peace and comfort there is, and I love the photo of you both. (((Hugs)))

Debbie, I just want to say my tears I will shed with you. I know. I know. I pray the Lord wraps His arms around you both, holds you close and answers your prayers. With all my love, my heart and tears, I am with you.

Hi Debbie--We understand the desire for both of you to be released. You are such a kind, compassionate person--you only want those you love to be free from suffering. It's a common wish (and the guilt is a common reaction). \r\n\r\nI love the picture--it shows the love. Your love is like a blanket that covers you both. It will always live. \r\n\r\nPlease let us know you both are doing as you can. We're thinking of you.

Debbie, I love the picture you posted of how you want to remember Richard. I am amazed at how strong you are as you go through this difficult time. It sounds like you have no regrets for the time you have and are spending with Richard. I can't imagine how he feels going through this pain and watching you bear the burden too. My prayer for you is courage and leaning in to be present with Richard, giving him permission to let go if need be. . . May you be granted peace.