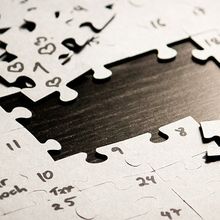 I miss being regular here. Now that my son and I are back to school, I don't have as much spare mental energy for writing here. But today I'm feeling so bad, I think I need the therapy.

On the weekend, we attended a funeral for my cousin who was in hospice. He passed away very shortly after we had visited, and this was just three months or so after his wife had died. Thus, three months ago, we attended the visitation Friday evening, joined some other family members for dinner, stayed in a hotel, and attended another visitation and church service the next day. We followed the same schedule this weekend, almost exactly. At the church service, the same people gave eulogies: the same pastor, the same children and niece of my cousin. The stories were different but so connected to the previous ones we had heard because my cousin and his wife had very similar - or at least completely harmonious - personalities and had done everything together. The same choir sang the same beautiful music.

When the church service was over, we needed to go. My son had gone to the bathroom, my husband had gone to get the car, and my mother and I had to find my son and then navigate the huge crowd of people to find the side door. I was tired and sad and a little on edge when my mom needed to tell me that she had heard the entire service before. She knew it wasn't at the previous funeral, but somehow, she had already heard all the words that were said. She was upset and confused by the feeling and needed to talk about it, but I didn't want to listen. It sounded crazy to me and upsetting, and instead of listening and sympathizing with the weirdness of it, I tried to correct her perception and tell her that the experience was a completely new one even though it was similar to the previous one. And she disagreed and said, "I know I heard this all before. I could have said the words along with each person who spoke." And it seemed like she felt that she had been tricked somehow? Although now, I don't think that's what she was saying, just what I was hearing. She just needed to voice her experience. But I didn't listen and I wasn't patient; I cut her off and got us out to the car. This happened on Sunday. When we got home, I could see that she didn't feel well, but I attributed it to the exhaustion of the trip.

This morning, Tuesday, when I went downstairs for coffee, I asked if she was okay. She said, "Almost okay." I asked what was wrong, and she brought up the memory experience again, and how I had cut her off so harshly when she tried to tell me about it. I apologized and said I shouldn't have reacted that way. I told her that what she was saying confused and upset me. She said she was confused and upset by it too. She had not been able to stop thinking about it. I looked up "Deja Vu" on the internet and read a little bit about how a new experience can trigger a memory - or even a forgotten memory - of a previous experience and give it a feeling of familiarity. She said that it didn't explain what had happened to her.

I don't know why it upset me as much as it did at the time except that I was also extremely tired and sad. I don't want her to live in a different reality from mine. I don't want to inhabit that reality - even though I know that's the "rule" for living with dementia. But I also don't ever want to hurt her feelings, and I feel so bad today knowing I did.

Thanks for commiserating, Jan. I guess that is one small blessing of dementia. . .

I don't know how many times I've come to the end of the day and said mentally, \"Mom, I failed you today.\" I can't do anything except get up and try again the following morning, and be thankful she doesn't fully realize how I failed her.

Thank you both, Denise and Jenn. It always helps knowing other people have gone through the same thing. Denise, that's really helpful advice. I feel like I can respond better next time if I have a prepared response. Thanks for the understanding, too.

Thank you for sharing this. If it helps to know, you are not alone. Been through similar circumstances with my Mom.

Oh, LM, what a few very difficult days. I am so sorry about your cousin. Your visit is that much more precious.\r\n\r\nI've realized (the hard way) that our will power is a limited muscle. Meaning, we need will power to be empathetic and compassionate and understanding. When we use it up, we need down time to refill. \r\n\r\nCertainly, your emotional capacity (your will power) this weekend was over capacity. You're taking care of everyone and grieving--gosh, that's exhausting. It's understandable that you would be short with your mom--you just didn't have anything left to give.\r\n\r\nI love that your mom talked this out with you this morning. It shows what a strong, trusting relationship you have with each other. And, I love how you handled it. You apologized, listened, empathized.\r\n\r\nWhen situations like this happen to me, I realize I need an answer to use when the situation happens again. Perhaps this will help you. When your mom expresses an experience she's having that feels unsettling to you, you could use a response that manages the situation in the moment while giving you a chance to catch your breath. Maybe you could say something like, \"I can see that this situation is upsetting (or unsettling or confusing). Let's talk about this more when we get home (or after I've made dinner or helped Son with homework). I'll make us some iced tea and we'll sit and talk about this.\" Then give her a hug because in situations like this I think you both need to give each other a hug. :)\r\n\r\nThese changes really are so unsettling. You are doing so well to manage them as they come especially because you aren't warned when they come. \r\n\r\nI hope writing this out will help give you a fresh start today. Keep us posted as you can.