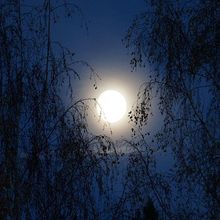 It’s a quiet Saturday night in early February and I’m sitting here on the sofa with Mom listening to some relaxing music and my new, lighted Zen waterfall. It’s very peaceful. The home aide left at 5:30, so it’s been a rather long evening. I can’t go upstairs to read, and I can’t jump in the car and go to the store or get a bite to eat. My whole existence is determined by whether I am “on call” here or whether I have a little time to get away. When you’re a caregiver for a parent with advanced dementia, your choices are limited and your freedom is severely curtailed. Just to give you an example of what I mean. About 6 pm, not long after the aide/caregiver left, I went outside briefly to put out some garbage and recyclables. The air was quite cool as a slight breeze greeted me. It felt so good just to be out of the house for a few minutes. The winter air was invigorating. I felt a little jolt of freedom, fleeting but precious. Sometimes I think only someone like myself who’s had such limited ability to do normal things over so many years caregiving can understand what it’s like. It’s difficult to explain, but I think loss of freedom might be the hardest part of this whole business of caregiving.

Today did not start well, beginning at 2 this morning and then again from 4-5. Mom could not seem to get to sleep. She claimed over and over she was itching terribly, her leg hurt and she was dying. At 4:30 she was very afraid and had this almost wild look in her eyes. “Where am I?” “Who are you?” “How did I get here?” “Where am I?” “Someone’s trying to kill me.” I had given her two Benedryl an hour earlier but it didn’t seem to be helping much. Finally, I had to give her an Ativan. As a result of that and not sleeping well, she was hardly able to get up and almost fell off the bed when I tried to get her up for breakfast. Then I could barely lift her. There were dirty bedsheets to pull off. And the regular caregiver had just called in sick. I was feeling a bit overwhelmed. I made a desperate call to another of our caregivers who said she’d come over and work this afternoon. What an immense relief.

The afternoon improved considerably. I was able to take a walk at the gardens and get some good pictures. I went to the grocery and Barnes & Noble and rushed to get home in time for the caregiver to leave at 5:30.

Tonight’s been kind of mellow. Mom’s in a rather odd mood, though. She’s been asking about people she knew long ago and saying things she hasn’t said in years. There’s also been a lot of incomprehensible stuff which I just go along with. She asked about her college roommate, a neighbor down the street from us years ago in New Orleans, and her niece who she doesn’t like much, so that was strange. So it’s been totally unpredictable what she’ll say tonight as I’m sitting here trying to write this.

As I said, tonight’s been unusually mellow. That’s not to say the Sundowners Syndrome will not kick in an hour or so from now. She could turn into paranoid, angry Mom.

She doesn’t remember anything from short-term memory. After an hour or so of constantly repeated questions, I go into “preserve sanity” mode. I start acting sorta stupid and silly, and usually I just assume Mom doesn’t notice or that she doesn’t care. But the other night she interrupted me and announced, “I think we have some crazy people in this house.”

“Who?” I asked innocently.

So much for that.

Other times when I’m in a good mood, I might start singing nonsense or made-up songs. Again, she probably thinks I’m crazy. So be it.

Then there was this exchange the other night.

Haha. I deserved that.