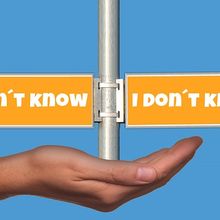 If it's not one thing, it's another thing...

Recently we had another episode where Mom got upset with me for abruptly taking over something that I'd spent quite a bit of time talking with her about. The last time it was about bills, and this time about the car. I spent the afternoon with some friends who live about an hour and a half away, and I borrowed her car for the trip. We talked extensively about my plan, and I made sure to ask her permission for the car and thank her profusely. All was well when I left, but when I came home, her face was clouded over, and I could tell she was unhappy about something. She said, "You just ran out of the house and yelled, 'I'm taking your car!' You didn't even tell me where you were going!" And then what did I do? I defended myself. Because nothing else occurred to me except to try to change that false and very negative memory to a positive one. I don't know if she ever believed me, though, because she had NO MEMORY of me talking to her and asking for the car. She acknowledges that she forgets a lot, and she was sorry when she realized how upset I was. And I went upstairs and cried and felt sick. When we have conflict, I feel like we are losing our one strength, the one thing that makes this caregiving gig okay.

The next day, today, we had no more talk of my rude and abrupt behavior. I had to take my son to the orthodontist, so I invited her to go along so that we could have lunch afterwards at Ryan's. She agreed happily and off we went. My son's appointment was way too long--an hour and a half!--and we were all hungry and tired when he was finally released. When we got to the restaurant, she began complaining of a headache and upset stomach. She had mashed potatoes and ice cream. I took her and my son home, and went back out soon after to my own doctor's appointment. When I got back from that, she was feeling okay. I brought her some leftovers for dinner and then headed out to an evening meeting. I was home an hour and a half later, and she was in misery with diarrhea and painful, urgent urination. I started her on Immodium and Azo, but the urinary pain was so bad she was crying. I decided to take her to the ER, but my husband wisely suggested I try to get a prescription for an antibiotic from the on-call doctor. I did that.

Anyway, I brought home the Cipro and gave it to her and monitored her Immodium use. I thought maybe the new brain pill (Aricept) might be causing the diarrhea, since she's had several awful episodes since she started taking it. I called the pharmacist and asked if she could stop taking it suddenly or needed to taper off, and she said to get the doctor's permission before removing it, but that it should be fine. Whatever. I took it out. But I don't know what I'm doing. I feel like putting that in all caps. I have no idea whether any of my decisions are good ones or not.