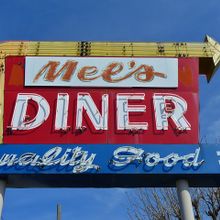 It feels like forever since I wrote my first blog  entry.  In that entry, I talked about an upcoming trip to the Capitol and our possible plans for John to join me.  Plans have changed and now I will only be gone for 2 nights so he won't come along this time but we're going to try to plan a few days away this summer.  I am conflicted about taking this trip.  On the one hand, I could use the break.  On the other I know I'm going to be worried the whole time.  Couple that with the fact that I can't sleep in hotels and it should make for a difficult two days.

John is an incredibly private person.  He's been very depressed lately and doing things out of character.  A short time ago, he decided to get back on Facebook.  He's always shunned it but suddenly, he's posting the story of his life.  Literally!  He started with what ever photos he could find from his childhood and went through high school, undergad and grad school all the up to now.  He became completely obsessed with creating this photographic timeline of his life.  In true John form, he created neat little albums to document each phase of his life.  It's not just Facebook.  John rarely laughs any more.  His tone has changed and it just doesn't seem like he gets any joy from life.  There's a sadness in his eyes and in his tone that wasn't there before.

Before kidney failure and dialysis, we used to love food and weekend getaways.  No doubt a contributing factor to our current situation.  One of our favorite things to do was jump in the car and drive to a city we'd never visited and scout out the best cupcakes and the best "Diners, Drive Ins and Dives."  Now, it's baked chicken, white rice, and a salad every night.  Forget about salt, now it's all about garlic and rosemary.  Phosphorus has become our mortal enemy that we just can't seem to beat.  Rarely do we eat out - it's just too difficult.  Those days are treats now reserved for only very special occasions.  I admit though, it does make them even more special when they happen.

Some of  my family was recently down for a weekend visit.  Even they noticed a change in him.  After they left, my mother called me concerned.  "Michael, is John really depressed?  He's different."  And he is different.  I worry that he's giving up even though he assures me that he's not.  I'm a social worker and I'm supposed to know how to help him.  I want to "fix" this and I know that all I can do is be present.  I feel guilty about the upcoming trip to D.C. without him.  I worry about leaving him for two days but at the same time, I kinda need it.  I found what I hope will be a wonderful Ethiopian restaurant that I'm itching to try.  I'll make the most of it, but it won't be the same without John to experience it with me.  Maybe I'll text him a picture of my plate...or would that just be mean?

Thank you Denise, those are good questions to think about. John has the best relationship with his PD nurse - not there yet with the others. I am not sure if they have talked about the depression but I am encouraging that as well as additional contact with his best friend from college. Hoping it doesn't go to long or deep but keeping very aware of it.

Hi Michael--It's great to hear from you. :)\r\n\r\nFirst, I understand the guilt about your trip and I also think it's good to have a break. So, go and enjoy yourself.\r\n\r\nCould you ask John if he would enjoy receiving photos from your trip? Perhaps you could text him photos throughout the two days, including your delicious meals. :) I know it can be hard to know what to do. Will the photos be painful reminders or joyful diversions? He can let you know the answer.\r\n\r\nDo you know if John has spoken to his doctor about his depression?