CatKBorn
It's been a little over a month since Mom moved in - neither of us are adjusting very well at all. I have as a result discovered a few things.

I'm angry pretty much all the time. So is she. Angry at the disease. At each other. At everything. It doesn't seem to be abating at all. We're probably both also depressed but while I'm considering seeing someone - if my insurance will cover it and I can afford the copay she flat out refuses to consider anything of the sort.

Follows me everywhere, not far enough into the disease to be able to be easily distracted, constantly looking over my shoulder -- even when I try to write here which is why I haven't been able to write because she can still read (she's tried to see what I'm writing now twice already). She can't talk now though, once in a great while a word slips out -- usually "No!" - but mostly it is "doh", for everything, doh-doh-doh-doh accompanied by shaking a hand at me. If I don't figure out what it is she's trying to say she gets closer and louder and more angry. The closer part is pretty awful because she stinks.

She still will not bathe, not sponge baths, not showers, bath... nothing. Took her to get her hair cut tonight and the dirt behind her ears and crusted on her head was embarrassing. Fortunately the hair stylist has dealt with us for 20 years so it wasn't too bad but still, it's awful. But you just can't get her to see it. I've installed grab bars, bath mats that stick tight.... no good. You can't talk to her about it, she gets really upset. The battles continue over clean undies too.

Can't use utensils very ell and sticks her hand into the peanut butter (or anything else) jar to get out what she wants. Since she doesn't ever wash her hands I find food stuck to everything all over the house and yes, we have ants. I'm also afraid to eat anything.

We might have one in five days without a battle.

Her cat remains locked up in the bedroom. I was home from work today with an awful headache so while she went to Optimists club I opened the door. Other than a growling exchanged between one of mine and this kitty - no problems. Of course now the door is closed again. That poor animal is in there alone all the time. This is not good for the kitty.

I have no control over the television but can't watch it in my room while she watches what she wants out in the living room. She keeps coming after me, will not leave me alone, gets upset if I'm not in the same room. But if I suggest watching what I want to watch all hell breaks loose. Can. Not. Win.

I have gotten pretty much no where with the local support agencies. At the end of my rope. So stressed out. Angry. Depressed. I can't fix any of this and I'm a fixer by nature. 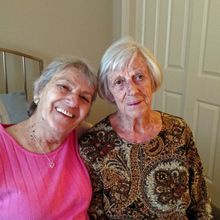 Mom (left) and her eldest sister Theresa just two years ago -- Theresa has Alzheimer's and is in assisted living in St. Louis. Mom could still talk, still drive, was only slightly confused.

You've faced many challenges since your Mom came to live with you! \"Home\" has drastically changed for both of you. You're doing what you believed you should do by taking Mom into your home. You are doing all you can do and your efforts are commendable! Thank you for all you are doing for your Mom!